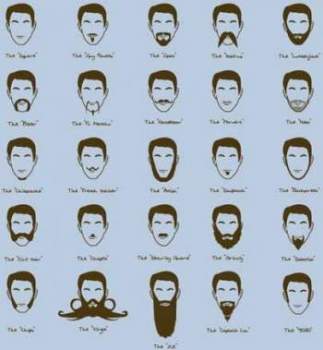 Since around 2012, it seems, men have once again rekindled a love for their facial hair. While the popularity of some beards such as the lumberjack might be waning, there are signs that other styles are beginning to gain ground. Recently the goatee, rarely seen out in public since the 1990s, has made something of a comeback. Meanwhile the elegant Van Dyke beard, popular among Stuart monarchs, is enjoying something of a revival, along with waxed moustaches. Indeed, a whole industry has sprung up to cater for men who want ‘product’ to pamper their whiskers, with a dazzling array of beard oils, conditioners, combs and trimmers. Types of men's facial hair.

But by no means were beards always popular. From around 1700, hair completely disappeared from men’s faces all across Europe. Amid new aesthetic ideas about male appearance, facial hair had become associated with a rough, rustic stereotype, which went against the smooth, shorn skin of the ‘polite’ gentleman. This neat, streamlined appearance lasted the best part of 150 years. So unpopular was the beard, in fact, that an 1834 book The Toilette of Health stated that an “unshorn chin has a degenerating aspect, and is only, if at all, excusable in the lowest labourer and mechanic”. Instead it was shaving that represented manly attributes, as it required patience, fortitude and stoicism in the face of discomfort. A morning shave, so the Toilette of Health argued, put a gentleman “in a frame of mind favourable to his moral improvement”.

Nevertheless, there were a few attempts to bring about the return of facial hair. The early 1800s saw a trend for side-whiskers, which became extremely popular – so popular, in fact, that some canny traders began to peddle false whiskers to men who wanted an instant fix. One report even suggested that women were training their locks down their faces and tying them under their chins, to imitate their hirsute husbands. In the 1840s, spurred on by the successes of British cavalry soldiers in the field, men began to grow moustaches in imitation of these new, ‘ultra-masculine’ heroes.

But it was the period from the mid-19th century that proved to be a golden age for facial hair. From the early 1850s, full, thick beards quickly became an essential accoutrement to the visage of the gentleman. Why, though, did men apparently turn to the beard with such enthusiasm at this precise point in time?

The reappearance of the beard occurred during something of a crisis of masculinity, and of fears about the quality and fighting spirit of British men. Some believed that years of relatively ‘soft’ living and comfort had enervated the British male, leaving him in no condition to respond to the ever-troubling French military threat. The constraints of both home and workplace had served to confine numbers of Victorian men indoors for much of the time, creating a tension between ideas about the male body as being perfectly evolved for work outside in harsh elements, and to conquer wild nature, versus the reality of a life largely spent inside an office or factory. Advocates of a more physical model of manliness looking for an ideal sign or emblem of masculinity upon which they could hang their ideas found the perfect example in the beard. Here was something that was easily and cheaply adopted, and theoretically open to nearly all men. But to convince doubters of the absolute necessity of the beard, supporters needed to come up with hard evidence.

Aesthetically, for example, it was claimed that only a beard lent a man’s face its full gravity and majesty. For Dr Mercer Adams of the Dumfries and Galloway Royal Infirmary, the beard was nothing less than the “badge of manly strength and beauty”. In older men it also conveyed the impression of wisdom and a lifetime of experience. “When half a hundred winters have blown their snows and sleets upon it,” opined the anonymous author of the 1859 article “The Beard”, published in The Crayon [a journal devoted to the graphic arts and the literature related to them] “how venerable does the patriarch look?”

Perhaps the most common claims made in support of the beard, however, related to health. This was an era of growing concerns with air quality and dusty and dirty industrial environments. The beard was held up as “nature’s respirator”: a natural filter that could trap dust and germs before they could cause damage. In 1854, the Committee on Industrial Pathology on Trades Which Affect the Eyes recommended that workers “who are exposed to the influence of dust, grit, chips, splinters &c” would do well to grow beards, not only to “arrest the particles of dust and grit” but also because the beard acted as “a tonic influence… to the nerves of the face and eyes” and generally improved health and comfort. It was even supposed that the beard had a direct link to the health of the eyes, as evidenced by the fact that pulling the hairs of a man’s beard caused his eyes to water.

A range of other health claims was made. The beard was argued to prevent toothache, by capturing and warming the air around the mouth. It also supposedly protected the face from extremes of weather and cold, preventing damage from sunburn, cold winds and frost. In addition, a beard was said to keep the throat warm, which in turn prevented respiratory ailments and protected the voice. Anyone whose job involved public speaking, including clergymen, were encouraged to grow a beard for the sake of their vocal chords.

But some played upon the discomfort and inconvenience of shaving, arguing that submitting yourself to the tyranny of the barber was a dangerous act. As the anonymous author of “On Shaving” in the Weekly Mail newspaper put it in December 1891, “there can be nothing more helpless than a man under a barber’s hands”. Meanwhile, a letter to the Workman’s Times the same year cited evidence from a “medical writer” who had scrutinised a shaved chin under a microscope and “discovered that the chin resembled a piece of raw beef”. “No!” railed the correspondent, “decidedly I shall not get shaved!”

A cartoon depicting a man making fun of another who is being close-shaved, c1800. (Photo by Hulton Archive/Getty Images)

There were also financial objections to the practice of shaving, often relating to the supposed working time lost. An 1861 article in no less a publication than the British Medical Journal suggested that the American economy lost an aggregate of 36 million working days in an average year, simply from the time spent shaving!

By the last decade of the 1800s, the great Victorian beard movement had largely run out of steam. While plenty of men still sported them, and publications still trumpeted the supposed benefits of the beard, the dawn of the 20th century brought a return to a more clean-shaven chin, with a preference for the moustache.

How, then, does today’s beard trend compare? If the Victorians had identifiable influences upon their facial appearance, what sorts of motivations might be leading contemporary men back to beards? Individual men might argue that they simply want a change; want to see themselves with a bearded face; can’t be bothered to shave or, simply, that they like a beard. But in aggregate today, just as in the 19th century, these decisions often betray broader trends or concerns.

In fact, surprising as it might seem, there are some interesting comparisons to be drawn. First is the issue of masculinity, and challenges to traditional male roles. For the Victorians these included industrialisation, urbanisation and tensions in gender roles. Yet in many ways today’s men face similar issues and perhaps, sub-consciously, threats. In today’s fashion-conscious and globalised society, the pressure upon men (and women) to conform to bodily ideals is increasing. Idealised role models are everywhere, from city street advertising to the deluge of imagery on the Internet.

Gender certainly continues to be a big issue. For Victorian men this was brought about by calls by women for more empowerment. Today, gender is far more fluid than in the 19th century, with new categories of gender and the increasing blurring of the previously solid boundaries between male and female bodies. Beards have long been a potent symbol of the male body, but equally one that can be subverted.

Surprisingly, even health claims still continue to surround beards – most recently claims that beards harbour as many germs as toilet seats. Subsequent studies, however, have served to back up some claims made by Victorian beard supporters. For example, a recent report by the University of Queensland found that beards could play a role in preventing skin cancer, since they are particularly effective at filtering UV rays from sunlight.

Whatever the reasons may be – and there are almost certainly many – the beard is seemingly here to stay, at least for the time being. As we look back at a past ‘age of the beard’, we might consider whether future generations may come to regard the 2010s as another?

Dr Alun Withey is a Wellcome Research Fellow at the University of Exeter.

A photographic exhibition ‘The Age of the Beard’ celebrating the popularity of beards in Victorian Britain ran at the Florence Nightingale Museum in London from November 2016 until April 2017. To find out more, click here.

There are no comments for this post "A brief history of beards - History Extra". Be the first to comment...