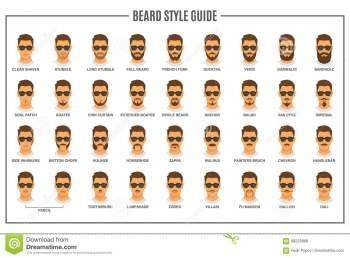 One thing that all men can experiment and not feel bad about at all is their Beard. It is the expression of manliness. If you ever considered of sporting your beard the most different way, now is the time! Prior to just going wild and getting it done, you need to consider your face shape however. Based on your face shape, you can sport the best style and look your best. Beard style guide.

Broadly, there are about 4 face shapes which are the oval, the round, the square and the rectangle. The key to decode the beard style is to keep the style a contrast to your face shape. If you wouldn’t do so, you can goof up the whole thing and look like a victim of style sting. To avoid such situations, get to know what suits your face shape the best and get going.

People who have an oval face shape are considered to be blessed. It is the ideal one which can pull off any style with ease. These guys can sport anything and look smart effortlessly.

A neatly trimmed mustache that sits royally above your upper lip without any extensions is the original stache style. No beard is needed to sport this one.

The chevron is an evolved style of the Original Stache. A perfectly trimmed mustache that fits the size of your entire upper lip with slight extensions towards your chin gives you the Chevron look. No beard is needed to get this look.

Yet an elongated version of the Chevron style is the Horseshoe Mustache. To get this look, you need to have a neatly trimmed mustache which stretches until your chin without being joined at their edges which look just like bars.

Beard Styles For Round Faces:

As the face shape has a circular look, people with this face shape can try beard styles which give their face an angular look. Here are few which they can try:

This style does not require sideburns. All you need is a clean beard running through your jawline and a mustache detached from your beard.

A clean and clearly defined beard that runs through the jawline which forms the shape of an anchor from your chin and a clean mustache which is short and detached from the beard gives you the anchor beard shape. To give this look a cutting edge finish, you can tighten the edges of both the mustache and the beard.

A clean short beard and mustache which are neatly trimmed, gives you the short boxed beard look. Ensure that the edges are trimmed evenly and you are ready to go.

Those with square face shape can take advantage of the sharp angles formed by their jawline and look hep as they adapt the following styles:

The mustache and the chin patch are needed to sport his beard style. Both the elements need to form a circle. The perfect one which forms a contrast for all the angular square shaped faces.

Yes, as the name goes, this style is inspired from the goat. This is a small patch of beard on the chin completely.

Similar to the circle beard, the royal beard is has a mustache and a chin patch. The chin patch is however not connected to the mustache. It forms and looks more like an anchor giving the ultimate royale look.

This face shape is an elongated one. We use the beard styles which draws the attention away from the elongation of the face shape. Here are few style which can make you look ravishing:

One of the most easiest styles to sport is the Chin Strap. All you need to do is have a thin stip of beard running along your chin vertically.

To get this look, you need to have neatly trimmed beard running through your jawline completely without sporting any mustache.

A Gunslinger Beard is the one that incorporates a horseshoe mustache with sideburns that are not connected to the beard neither the mustache. The sideburns are kept wide unlike the other styles.

There are no comments for this post "The Ultimate Beard Style Guide". Be the first to comment...