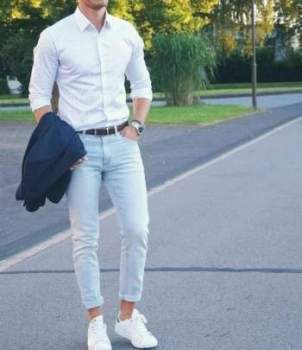 Today I’ve got a guest post from Kayla Ethan about the Beard Styles that you might see around in the United Arab Emirates. Dadi style.

If you’re visiting and sporting a wad of facial hair, be prepared to have a chat with the people in the street!

Beard Styles of the UAE

I am a humble traveller, who likes to travel whenever he gets the chance, which is a bit rare.

But, a trip to Dubai, will remain one of my fondest memories. Most people are probably aware of the diversity of cultures there. The whole place is full of tourists, but the thing is, is if you wear one of their traditional dresses and have a beard, you pretty much look like the locals.

The other thing is that the locals always have a beard, which is usually cropped very close to the skin, but it is always there.

The local transport system is excellent and I prefer to use a well-managed local system over private transport. I used their Wojhati app to plan my travels and used the Metro rail system which runs through the center of Dubai and has connections to all the major shopping malls and tourist spots.

Anyway, it is only natural that while travelling one tends to grow a bit scruffy, so a trip to the barber is a must. Needing to clean up a bit, I went to a local saloon and asked the barber to trim my facial hair in the local style. When I came out, I must say that I was a striking figure.

How to shape beard styles

My going around apparel is a modest North Face Freedom Pants, coupled with a spacious tee, which is usually accompanied by my backpack. Despite this, you would not believe how many people tried to talk to me in Arabic over the next couple of days based on my appearance.

But there is one particular incident that I would like to mention.

I was visiting the famous Dubai Mall and had to change lanes at Burjaman. I got out and was just looking at the exit points when this well dressed gentlemen (possibly Egyptian) comes to me and starts asking me about something in Arabic.

We all have a universal language and I could tell from the signs that he was kind of lost. Now obviously, I do not have even a basic understanding of Arabic and could not understand a single word.

But, he kept on going on about his problem, when he finally stopped, I quickly interjected that I could only understand English.

Apparently, he had a better understanding of English than I had of Arabic. So, ensued a conversation in broken English, which had us parting ways while smiling.

This led me to research on beards in general in Dubai. So, I asked the people who I was staying with.

Apparently, the locals will not generally keep a big full beard except for the Prayer leaders.

The Egyptians are usually clean shaven.

The people with huge full beards are usually from the Indian Subcontinent or Yemen.

But I have no idea who the hell I was mistaken for!

I’m still trying to figure that one out!

(The Travel Tart) – there you go! If you’re ever out an about and looking a bit scruffy after travelling long term, you might be mistaken for someone that you’re not!

There are no comments for this post "Beard Styles - Dubai Style!, The Travel Tart Blog". Be the first to comment...