Chin beard styles. What Kind of Haircut Goes Good With a Beard? 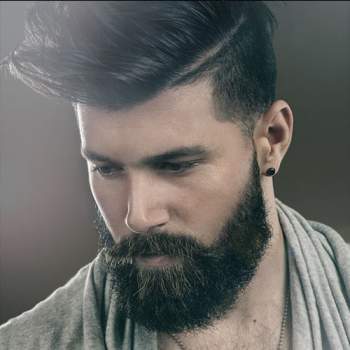 Choosing the Right Style. What Haircuts Look Good with a Beard?

There’s no denying that beards are still in style in 2015 and they look here to stay. Still, while beards will definitely add a touch of rugged sexiness to many looks and styles, it takes a special kind of man to pull off the beard look properly. Of course, not every man is even able to grow a decent beard, but for those that can, you’ll need to consider much more than just which beard style (or mustache, goatee, full beard or other facial hair style) you want. Looking smart, sexy and stylish with a beard is about more than just knowing how to grow, maintain, and trim a good beard, as you’ll also want to pair it with the right hairstyle if you want to truly look your best. Hair style for beard.

If you’re like most men, you’ve probably been wondering what kind of haircut goes good with a beard—so to help you out, we’ve done a bit of research and are here to present some of the best haircuts for beards. If there’s one bit of wisdom we wish to impart to our fellow bearded fellows out there, it’s that looking stylish requires a bit of time and thought. Believe us when we say that the haircut actually matters as much as the beard itself in determining how you’ll look, as there are some hairstyles that work perfectly with some beards, while there are easily as many or more that can quickly ruin the look—no matter how great of a beard you can grow.

Know the Shape of Your Face

Like with beards, men with a shorter, longer or rounder face should be careful to choose a haircut that helps to accentuate their other features instead of doing the opposite. For instance, men with short or rounder faces usually gain a huge benefit from keeping the sides of their hair short, as otherwise they risk their face looking rounder or fatter. On the other hand, men with longer faces are usually better off avoiding a hairstyle that’s shorter on the sides and longer on the top, as this type of hairstyle tends to make an already long face look that much longer.

Of course, your choice of hairstyle will also depend in large part on what sort of style or look you’re going for—be it more professional, wild, rugged or full on mountain man.

Like choosing a beard style, determining what kind of haircut goes good with a beard is mostly a matter of personal preference. That being said, there are at least a few hairstyles that are currently popular and tend to look good on most bearded men.

The undercut is an incredibly popular style amongst younger men with big beards, especially if they don’t have too long or skinny of a face. The classic undercut involves keeping the sides closely trimmed short, while the hair on top of the head stays quite a bit longer. With the top, you have the choice of using pomade or gel to keep it slicked back in place or just letting it lay in a more natural way. Either way, you’ll want to make sure the barber fades the sides near the top and you may want to consider having the barber shave in a part, as it looks good and makes it easier to keep it properly styled on your own. There’s actually many different ways to wear the undercut, but most of them require a bit of help from hair products, as you definitely want to avoid letting the top hair hang down on your forehead. The biggest thing about the undercut is that the hair on top hangs slightly down past the fade sides, which then blend in perfectly with the beard. Another benefit of the undercut (or any hairstyle with short sides) is that it wearing it with a beard that’s slightly longer can help make the beard look much thicker and fuller.

The pompadour is one of those styles that really seems to come and go, but right now it is definitely in style. In truth, there really isn’t a huge difference between the pompadour and some versions of the undercut, but in most cases the pompadour requires you to keep the hair on top of the head quite a bit longer. With a true pompadour, the hair on top of the head should ideally be around 6 inches and kept slicked back with product. To achieve the real pompadour effect, you’ll need to use pomade, a blow dryer and a comb to achieve the trademark “up” look at the front.

A timeless favorite that works well on nearly any man, no matter the shape of their face or the look of their beard. The classic square crop is definitely one of the most basic haircuts out there, but also one of the most versatile. With this style, both the sides and the top are all left to the same somewhat shortish length (the actual length is up to you, but be aware there’s a fine line between too short or too long—both of which can ruin you’re carefully crafted style. While the classic square cut looks good with many different facial hair styles, it’s especially popular amongst men with full beards, as it can help add a more professional look to that rugged, manly style.

Another reason we like this style is that it’s incredibly versatile and can be worn in a number of ways, from more messy to coiffed, perfectly styled and everything in between.

Not to be confused with the awful faux-hawk (which no self-respecting man above the age of 25 should be wearing), the peaked cut was incredibly popular in the 90s and is suddenly making a comeback. This style is quite similar to the classic square cut, except that the sides are usually faded a bit more and the front, top part is kept slightly longer to allow for styling. Still, that’s the thing with this cut, as it looks good for those who know how to style it, it also takes a bit of work to pull it off, as you’ll need to add a bit of volume to that little front part to work it properly.

While there are some who would argue that longer hair on guys is quickly going back out of fashion, pairing slightly messy, even slightly longer locks with a beard can also scream manliness and has a certain rebellious appeal. However, the biggest key here is to still keep it short enough that you don’t look like a slob.

While having slightly longer, tousled hair is supposed to make it seem like you don’t care about your looks as much, actually not caring about your looks and letting your hair get too long is definitely something you want to avoid. A good rule of thumb is to keep the hair on your forehead trimmed slightly shorter (or else pulled back to the sides) and by all means, don’t let your hair get long enough that it touches your shoulders. Anything more than two or so inches past the earlobes is starting to push it and can take what should be a manly look and turn it into something much more feminine.

At the end of the day, deciding what haircut goes good with a beard can actually be quite tricky, which is why we would usually recommend to choose a hairstyle that you like and then adapt the beard to it, rather than vice versa. While you can always change up your beard styles to see what looks best, the fact that the hair on your head grows slower than that on your face means you’ll be forced to live with the mistake much longer should you choose a hairstyle you’re not happy with.

If you found this article helpful please be so kind as to share it on Facebook or other social media per the buttons below. We really would appreciate it as we have worked so hard on this post for you. I have a feeling some of your friends and family will find it helpful as well.

Also be sure to join the Prim&Prep community! Not only will you have a chance to WIN your choice of a quality safety razor or beard oil but we will provide you with all kinds of helpful and enlightening male grooming tips and advice directly to your inbox so you don’t have to waste your time fiddling on the web to find the right information to look and feel your best. There is nothing to lose and so much to gain. SIMPLY SUBSCRIBE BELOW!

There are no comments for this post "What Kind of Haircut Goes Good With a Beard?". Be the first to comment...