Men's facial hair goatee. Long or Short: How Did the Vikings Wear Their Hair?, C.J. Adrien 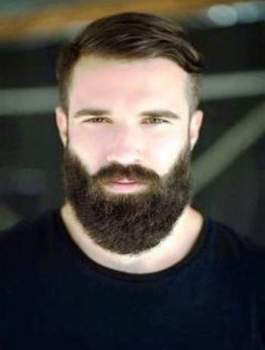 To many, the answer is obvious: Vikings were barbarians, fitting of the description of godless savages who would have worn long, flowing locks of hair accompanied by immensely thick beards. Or did they? Recent revisions to Viking history have painted a starkly different picture of what life was like for Scandinavians during the Viking Age. We’ve since learned that they were cleanliness-oriented, bathed weekly, and paid particular attention to their appearance. We know now that women decorated their clothes with colorful beads among other shiny objects, and the men groomed their beards daily. So with all of this new information available to us, the question stands: how did Vikings wear their hair? Short hairstyle with beard.

Contrary to popular belief, long hair and a thick beard were not universal styles among those who betook themselves a-Viking (to go a-Viking). Long hair was known to be a hazard during combat and was challenging to keep clean during long sea voyages. Historians have noted that very short hair may have been reserved for slaves, but there exists evidence to show that hairstyles varied considerably among individuals and that some notable figures chose to wear short hair. Evidence from the archeological record—which includes statues, statuettes, and picture stones—shows men with many variations of haircuts. Some may have worn their hair shoulder-length. Others may have had bowl-cuts. Many may have trimmed and groomed their beards into goatees. It appears that, precisely as it is today, hairstyles may have been a form of self-expression.

Various stones represent early Viking Age Scandinavians in varying fashion. For example, the Tängelgårda stone (pictured below) depicts men who have long hair and beards. If you look closely, there is a man on the lefthand side, below the horse, who does not have long hair and is presumably a slave.

The Stora Hammars Stone (pictured below), one of the most important relics of the Viking Age, also depicts a variety of hairstyles. Some have long hair and beards, others short, and for others it is unclear.

While evidence for hairstyles remains sparse for the early Viking Age, a few valuable finds have indicated the variations among different people. A head-carving from the Oseberg Ship Burial (pictured below), for example, shows a man with a well-trimmed beard and a well-fitting coif, indicating that the long hair and free-flowing beard were not everyone’s first choice. This evidence dates to the early 9th Century.

The breadth of evidence points to changes in hairstyles as the Viking Age progressed and the raiders of the early 9th Century became the conquerors of the 10th Century. Below is a coin from Dublin, depicting the king Sihtric of Dublin, who neither had long hair, nor a beard. And yet, he is considered to have been a Viking.

What this coin represents is the tendency of Vikings abroad to adapt to the culture they intended to conquer. This happened most prominently in Ireland first, then England, and Normandy thereafter, culminating in a sharp divide between Viking groups by the end of the Viking Age.

By the end of the Viking Age, the Christianization of Scandinavia imposed rules surrounding vanity, effectively ending the varieties of hairstyles among Scandinavians (for a while). The Bayeux Tapestry shows us that military men during this period wore short hair, particularly in the back (pictured below).

How did the Vikings Wear Their Hair?

Ultimately, the evidence points to a culture that allowed self-expression. This may be a hard pill for some to swallow, but it appears the eccentric hairstyles fashioned by the Vikings in the History Channel’s eponymous series may be closer to reality than the idea that they all had long, free-flowing hair. It also appears that styles changed with time and by location. Mainly, Vikings’ hairstyles met the demands of their profession, which was to raid, pillage, and later, conquer.

Learn more about the Vikings with these great books:

There are no comments for this post "Long or Short: How Did the Vikings Wear Their Hair?, C.J. Adrien". Be the first to comment...