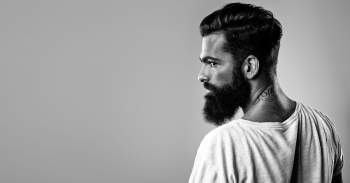 India's best known home-grown sport is famous for being a rugged game wherein men who have bricks for muscles come to rough it out against one another in an effort to gain the 'W' for their team. Seasoned Kabaddi players are indeed some of the most down to earth, well-built, burly men you will ever see. Though, when I say 'burly men', I'm sure the first thing you picture are tall, broad and bearded men. Well, they may be tall and broad but bearded? Not anymore. Because The Break The Beard Challenge Is Back! Beard styles hd.

So, if you remember, earlier this year, our beloved cricketers took the break the beard challenge. In the process, they inspired many to give up their overgrown, unruly beards and go for slick, more mod styles instead, which, in turn, highlighted their individuality. And now, even Kabaddi players are embracing grooming and joining the #BreakTheBeard party...

It started when the captain of Pro Kabaddi league's U Mumba team, Anup Kumar saw Jadeja and the gang breaking their beards. Being a player of the sport where pangas are taken left, right and center, he did exactly what you'd expect him to do - He took the panga and decided to break his beard.

Got to admit, the man came out looking better than before. The new style goes darn well with Anup's facial structure!

It didn't stop there, though. Taking a queue from the veteran, the young raider Rakesh Narwal also decided to break his beard.

And this is UP Yodha's Rishank Devadiga showing off what he can do with his facial hair.

If that's not a dramatic transformation, IDK what is. What a look!

The beard breaking chain was then taken forward by Puneri Paltan's Dharmraj!

That mustache is... just glorious.

Puneri Paltan's defender Ravi Kumar was next to join in!

Woah! He should honestly stick to this new style. So. Much. Better.

And finally, this is Gujarat Fortunegiants' captain Sukesh Hedge's way of saying he's not gonna be left behind.

All these players from small towns and villages have gone through a tough journey to reach where they are today, having inspired tons of people across the country in the process. While the cricketers may have been the original issuers of the #BreakTheBeard challenge, it looks like these quirky videos and oh-so-sharp looks will soon make our kabaddi champs the new of trendsetters in the country.

Looking at these champs who came out looking better than ever, it won't be wrong to say that the Pro Kabaddi league is at its stylish best right now. I'm certainly fancying the idea of shaving my currently full grown beard down to a chin goatee. I sure hope all you bearded boys out there, too, would get inspired to do something more creative with your facial hair! Do let us know which of these transformations you liked most, in the comment section!

There are no comments for this post "After Throwing Lofty Kicks, Pro Kabaddi Players Are Breaking The Beard & It’s Indeed A Stylish Touchdown". Be the first to comment...