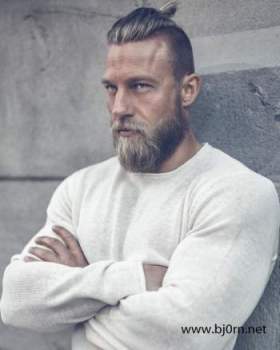 These days, the clean shave is sported out of choice: it’s fresh and accentuates your impeccable bone structure. But in the ’30s and ’40s it was practically obligatory. During World War One moustaches were ditched and growing facial hair was banned for most soldiers. This trend continued into the ’40s when slick hair and clean faces were all the rage. Modern beard styles.

Getting the look then: After deciding that the American electric shavers could be improved upon, Philips launched the Philishave: an innovative rotary system with three blades rotating beneath a round, slotted shaving head.

The clean-shaven continued to prevail in the ’50s, with bearded men being a small and very well-groomed minority. Unless you chose to wear a beard for religious reasons, anything larger than a small, neat goatee or a thin moustache was the reserve of Santa. Tidy facial hair remained de rigueur into the ’60s, with just a rebellious few bucking the trend.

Getting the look then: In 1951 the launch of the Philishave/Norelco Doubleheader, with its twin shaving heads, was a shaving breakthrough. Innovation continued into the ’60s with the introduction of the flip-top cleaning system and the iconic three-headed face-contouring design of 1966.

As hippie and disco culture grew, so too did the trend for facial hair. Sideburns, moustaches and beards – and hair generally for that matter – was left to its own devices, resulting in a hirsute, free loving generation. Cemented in mainstream culture by the likes of The Beatles and the Bee Gees, the full, untamed beard was there to stay.

Getting the look then:Well, that was easy: for the long, rugged, hippie effect, beards were left just as they were, with a daisy chain thrown in for good measure.

Style in the ’80s was larger-than-life, bringing with it a stylised approach to facial hair – with full beards immaculately trimmed or cut away to reveal an impressive moustache. In the ’90s businessmen opted for a clean-shaven look, whilst others took inspiration from grunge culture and bands such as Nirvana, sporting dyed beards and goatees.

Getting the look then: Philips catered to the groomed aesthetic of the early ’90s with the launch of the Cool Skin – a waterproof Reflex Action wet and dry shaver that could be used in the shower.

There are no comments for this post "Beard styles through history: the history of facial hair, Philips". Be the first to comment...