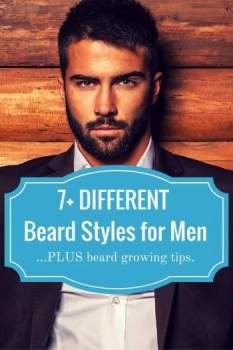 This article is devoted to presenting some of the most cool beard styles for men. Beard styling goes a long way in enhancing the inherent good features of a man’s face. If you are in the mood to experiment with your looks, a glance through the various styles, ranging from the flamboyant goatee to the rugged stubble styling, in the following lines. Different beard styles for men.

Beards and mustaches separate the men from boys. This write up explores some of the best beard styles for men. Styling a beard adds value to a well sculpted face or compensates for the shortcomings of a face. Men with cool beard styles, stand out due to their mature and stylized looks. Beard styling and mustaches offer them an opportunity to experiment with different looks. If you are bored of your usual clean shaven look, grow a beard and try out some of the vintage or modern styles. Nobody needs to be told how to grow a beard because, it grows on its own! However you can learn how to style it.

The story goes that Abraham Lincoln was advised by a little girl named Grace Bedell, through a letter, to grow a beard, as she thought it would suit his long face best and add class. Lincoln listened to the little girl and now we cannot imagine what Lincoln would look like without his beard. The beard changed the look and fortunes of Lincoln coincidentally!

There is no one unique style, that will suit every guy. According to the individual’s natural facial features, he may select a beard styling that best suits his personality. Of the hundreds of different hair style options, which a master hairstylist will provide you with, here are some of the most popular ones

This is a style made popular by the Amish community. It’s marked by a thin or thick curtain of hair grown only on the lower part of the face, only along the jawline and without a mustache. The chin curtain, as the name suggests extends from cheek to cheek. It is a cool style to try out. It enjoyed popularity in Europe, Japan and Russia in the 18th and 19th centuries. The thin version of the chin strap looks sleek and is easy to maintain. Try it out.

Known by the name of the guy who first popularized it, Anthony van Dyck, a 17th century painter, the Van Dyke beard is a combination of a mustache with a goatee or a soul patch beard, with no hair connecting the two or covering the cheeks. Some of the noted personalities who have sported this type, beside the pioneer himself are King Charles I of England and Colonel Sanders!

The goatee is an entire class of different styles marked by facial hair only confined to the chin area. Inspired from male populace of the goat community, this is a good beard style. I myself have tried this out and it looks quite cool. Your hairstylist will show you hundreds of variations of a goatee that you could try out, ranging from the short goatee to the broad version of it.

This is a combination of a goatee, attached with a mustache by a small beard bridge. It is quite a sophisticated style and is personally recommended, having tried it out myself. It is particularly recommended for men with small chins. The broad French beard balances the facial proportion, by broadening the chin.

This is a small patch of beard under the lips and above the chin with no mustache and otherwise clean shaven face. You can give it any shape you want, but a triangular pointed one looks good. It is one of the most modern styles, with almost no maintenance, other than some minimum amount of trimming. This is a style popularized by African-American Jazz musicians. Bruce Springsteen, and Frank Zappa are two guys who love sporting the soul patch.

I don’t think I need to explain stubble to you. It’s a light two day growth of beard which looks good on certain faces. It’s the classic tough guy look, much adored by most ladies. Plus, it’s extremely easy to maintain. All you have to do is trim it alternate days. Let your electric razor lightly hover over the beard, to maintain the stubble.

If you are the serious philosopher types, who believes in old style classy elegance, then the full beard is worth giving a thought. Sported by great personalities like Charles Darwin, Karl Marx and Leo Tolstoy, the full beard style is for the strong and silent, brooding types, who must also be patient enough to undertake the maintenance it requires!

This is a style that extends from the temples, and continues down along the jawline. It may or may not be accompanied by a mustache. Gives you a kind of a ‘lion mane’ kind of a look. One guy who popularized sideburns was Isaac Asimov,the great American science fiction writer.

If you have a round face, the goatee is a good idea for you as it makes it appear long. Avoid keeping sideburns.

If you have a long face, then avoid the goatee and go for a beard thick on the sides. Keeping sideburns is a good idea.

If your face is oval in shape, you are free to try any one of these styles as almost all will look good on you.

Before I wrap up this article, here are some interesting facts associated with beards, that you will surely enjoying perusing through.

Since times immemorial, beards have been considering as a symbol of virility and manhood. Alexander the Great is supposed to be one of the first kings and generals who ordered his men to shave off beards, also with being one of the first monarchs to have popularized the clean shaven look. His considerations for doing so were entirely practical. He didn’t want his soldier’s movements to be encumbered in close combat, by providing enemies with beards as ‘handles’ to drag them.

Ancient Egyptian, Persians and men from ancient Indian civilization valued their beards as prized possessions, as symbols of manhood and wisdom. In fact is some cultures, a man’s beard was cut off as a humiliating punishment for cowardice.

Listed in the Guinness Book of World Records, the longest beard belongs to Sarwan Singh from Canada, with an incredible 7 ft 9 inches of total length!

Many people suffer from the fear of beards or bearded people, known as ‘Pogonophobia’.

In the middle ages, holding getting hold of someone’s beard was considered to be a serious violation of a man’s dignity and was sorted out by nothing less than a one-to-one duel.

Hope this beard styling article inspires you to try out something new. You will surely realize the added dimensionality which a beard adds to your face and therefore to your personality.

There are no comments for this post "Beard Styles For Men Nagpur Today : Nagpur News". Be the first to comment...