All beard styles. The Story Behind Ricki Hall - The Most Famous Bearded Model - Beardoholic 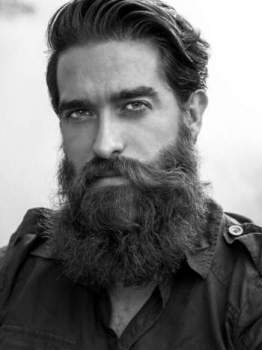 Whether you are a fan of modeling, fashion, or manly beards, Ricki Hall brings it all to the table in a way that the world has never seen before. Ricki combines a unique brass in your face style and reserved personality with a beard that screams dominance in his niche. Beard model.

This model has found a way to showcase his tattooed body, long flowing locks, and unique cut beard in a way that makes him hard to forget.

Here are just a few things about Ricki Hall you might not know and why he is poised to take over the modeling world.

Ricki Hall and the Early Years

Most male models are discovered and blast off the stardom in very unique ways, but the journey that Ricki Hall took is as different as his many tattoos and facial hair. When Tony was barely a teen, he loved ZZZap and The Boy From Mars.

He didn’t grow up any different that most of the kids in his quiet neighborhood, he loved video games and got his first real taste of work in the family business as a motorcycle mechanic. Ricki would drive his BMW to work, but not before he made certain to put on his eyeliner first.

Ricki outgrew that eyeliner over the years, but his love for motorcycles and BMW’s never wavered, it is who he is today. His beard, almost larger than life, has taken on a life of its own and propelled Ricki to near super-stardom.

Difficulties in Those Early Years

Ricki Hall recalls that once he decided to attempt a modeling career, things did not go as planned right at the start. For one, this tall man didn’t fit the mold that you typically associate with male models. As the years passed, Ricki decided to take the road less traveled and changed his appearance to match his personality.

He let his hair grow long, and he let his facial hair go wild. Male models and stubble are all the rage, but a tall guy with long hair and a full beard, that was considered odd to many.

Trying to break into the world of modeling was challenging for other reasons for Ricki, he was not liking what he saw around him in the modeling world, so he decided that he was going to blaze a trail of his own and leave everyone in the industry in his dust.

That Trip Out of Topman

Like any success story, this bearded model was going to experience a moment that would change his life forever. True, he stood out in a crowd, those long locks and facial hair complemented his tattooed frame, but his personality really made it a challenge for Ricki Hall to get his break.

All that would change on a trip to Topman. Ricki new at the start that his look was not the typical look of a male model, but one day while leaving Topman, a modeling scout approached him and set his life in a new direction overnight. Later in the day, he got together with the scout, he would go on to sign a modeling contract with Nevs Models.

Since that day, things move fast for Ricki who is now living in London. He has that look that really makes you stop and stare, and for advertisers, he was a goldmine they all wanted to hitch their wagon too quickly before he was gobbled up by the industry.

The Responsibility of the Beard

Ricki Hall knows all too well that his beard has men wishing to be him, and women falling over themselves to be with him. He knows too that he has a responsibility to his beard to stay true to his beliefs, and one being that discipline and persistence are the keys to getting anything you desire.

Just like the dedication, it takes to grow a beard, and the persistence to ride out the pain during the first few weeks of growing facial hair, if Ricki Hall can succeed in this competitive industry, anyone can succeed at anything if they want it bad enough.

Rather than try to take the road everyone else is traveling or trying to do things the same way others have, Ricki suggests going out and really letting yourself take a risk. When asked about his amazing beard, Ricki tells the story about why he ended up with the beard. It was because he was sick of all the pretty-boys in the fashion world.

In Ricki Hall’s own words, “There really is nothing as manly as a hairy man.” He goes on to say, “A man that smokes cigarettes, drinks beer, looks dirty, and wears musky cologne, is a real man.” This is in huge contrast to those carbon copy male models around the world.

Ricki says to grow that beard, be different, attract attention, scream, yell, do whatever it takes to show the world that you want something and there is nothing anyone can do to stop you from reaching your goals.

Why the Beard Styles of Anthony Thornburg are Rocking the Planet

There are no comments for this post "The Story Behind Ricki Hall - The Most Famous Bearded Model - Beardoholic". Be the first to comment...