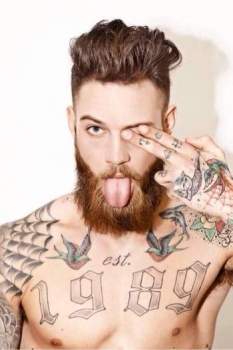 With the growing craze of haircuts among men, men’s beards are also taking a lead. Beard has been considered as the identity of a man that provides him a masculine appearance. A well groomed beard gives you a classy look and provides all the awesomeness that a man needs. Hottest beard styles.

In Arab, according to their religion Muhammad (PBUH), the prophet of Islam loved beard and he advised his followers not to shave off their beards, so that is why it is necessary for Arabic men to keep beard.

Arabian beard styles are not only famous among them but trending all over the world as Arabian boys are blessed with awesome and thick black beards that look stunning on their light skin. So if you want to get that Arabic style beard, then we have got a lot of options for you.

Scroll down to get the one which will suit you the best:

Goatee Styled with Joint Mustache: It is short trimmed beard of Goatee style that gets joined with the mustache. This beard style is perfect for young college going boys and even this Arabic beard style can be worn to work. If you want to keep this trendy beard style, then always make sure to trim you beard regularly otherwise this look can even become a mess if you will not pay attention.

Omar Borkan’s style: Omar Borkan is a very popular name in Kingdom of Saudi Arabia. He is a famous Arabian model who has always been criticized for his excessive sexiness. He most of the times try to show off his hot beard styles which a followed by people from all over the world. Girls, keep your heart alert because this man is too hot to handle with his beards.

Long, thick and full hot Beard styles: If you love to have thick and long beards, then this a perfect option for you. Thick and long beard are trending now-a-days in most of the Indian regions. Just show the world how much you are able to grow your beard and once it is fully grown, trim it according to the shape you like.

Light Beard Style, Extreme Lining: This beard style is not everyone’s cup of tea as it required a lot of patience and maintenance to have this kind of beard. This Arabic style beard is perfect for those men who are very particular and careful about their appearance. Anyone who owes this beard keeps the lines so sharp and clean that it instantly makes a good impression on people around them.

The Arabian circle: If you are someone who don’t like beard on all of his face, then you can go with this beard style. This Arabian beard style for men is popular among youngster who can’t bear the pressure of heavy beards. In this style, the beard of your chin connects with your mustaches that it resemble a circle that is why it is named as Arabian Circle.

Medium Length Beard: Among the trendy beard styles, it is very common among the gentlemen looking men. The length is this beard is not very short as well as not very long. It is perfect to carry to work as well as in college as it is not much heavy. This beard too requires maintenance in case your beard grows too slow or too fast.

Rough Facial hair: This will not be a favorite for most of the working men as it requires guts to keep this rough beard, which every men can’t. This beard will give you funky look that you sometimes require, being a model or a college student. It does not require a lot of maintenance, all you have to do is sit back and let it grow how it wants to be.

Thin untidy Beard: If you have a thin body structure, then this beard is for you. It looks trendy as well as doesn’t require so much of maintenance at the same time. So you can carry if without any hustle. You can team up this beard with long hair and you can perfect to go to college, parties and hangouts.

Middle Eastern Ethnicity Adult Beard: This Classical styled beard represents the cultural beard of most of the Arab people. For this beard, you need to maintain a very thin and nicely trimmed beard. You can join your mustaches with the beard but you have to make sure that the thickness of both the beard and the mustaches must be the same i.e. both must be thin.

The Religious style beard: If you are a follower of Islam and need a beard that represents you religion, then you can go for this one. This beard does not contain mustaches. Shave off your mustaches and let you beard grow to an extent. Proper care must be taken if you want to keep this beard and if you don’t, then it can appear as untidy hair on your face.

A Soul Patch: It is a stubble kind of beard that can be a real gem while having Arabic styled beard. This beard generally does come in light beard styles as it is so light that it properly enhances the features on your face unlike other beards which does not represent your facial features well. You can try this look, if you want attention of others.

Rugged looking Beard: Another one in the least of hot beard styles is this beard which perfectly looks so sexy. So guys those who want to impress girls, can definitely go for this look. It does not require proper clean trimming, it looks stunning as it is.

So these were all of the Arabian style inspired beards that all men from other regions are obsessed with. You can definitely pick one according to your choice and according to what will look best on you. Also change your beard styles after every month to skip that boredom that the single beard creates in your life.

There are no comments for this post "Hottest Beard Styles Trending among Arabic Men - Trendy Outlook". Be the first to comment...