Short beard designs. The evolution of men's hairstyles in Sweden through the years - The Local 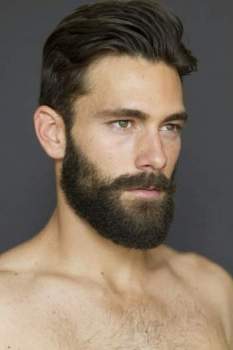 From mohawks to mullets to hipster beards, Håkan Ström has seen it all in his 30 years of hairdressing. The Local visits him at his Barber & Books (which does what it says on the tin) to talk about how men's hairstyles have evolved in trend-sensitive Sweden, and where they may be going next. Men's beard and hair styles.

"During the 80s, it was a time when people were really outside the box when it came to haircuts. People wanted it to be really really odd, or unique. Like pineapple haircuts," says Ström.

Not only pineapples. Ström remembers that he even dealt with "extensions and dreadlocks in different rainbow colours. Some were mohawks that were 70 centimeters long."

Why were people so explorative back then? What made them want to branch out?

Ström mentions that perhaps it was because they were much more into politics back in the 60s and 70s, so people loosened up with the outbreak of rock 'n' roll, becoming more individualistic leading into the late 70s and early 80s.

"Especially in the 80s, it was much more about creating yourself. You weren't supposed to care about your hair and beard, you were supposed to grow it out and listen to rock 'n' roll."

After the crazy pineapple cuts and mohawks came the mullet in the late 80s and early 90s.

The thing with the mullet, Ström says, is that "they became so massively popular, so everybody wore it, and everybody started to wear that same haircut".

Then he described it as a flip of the switch moving further into the 2000s, and people stopped growing their hair out: "I have been cutting really short hair since I started up in 2007."

So it went from all kinds of crazy styles in the 70s to the mainstream mullet in the late 80s to early 2000s, now to all-around short crew cuts.

"The thing with the trend of the skin-faded, short sided hairstyles, is it's been popular for so long now. I think it's going to be the same [as the mullet] now. If the trend gets really strong and everybody is going in the same direction, after a while it's going to split up and take a bunch of different turns."

Ström says "there's normally some guys that have some really crazy haircuts", but adds that not everyone wants to stay outside the box. "Tthe mainstream guy doesn't want to wear a crazy haircut, they don't feel comfortable."

Now what's happening in the coming years, Ström thinks, involves a flashback to the past, but also a branching out into the future.

"It always goes in circles and comes back. Previously it's been like 30 years between the circles of styles coming back, but they are like 20 years now. The circle is getting faster and faster now."

"Instead of having a really short haircut, you'll have a lot more length. It'll be definitely long hair, looser hair, it's going to be like surf-style long. I think what is coming is not so much shiny, tight hair, maybe toward the rock 'n' roll era around what David Bowie had."

"I think especially in Sweden people are really afraid to do something that other people don't do, but at the end of the day, everybody is scared to do something like that, because they want to be accepted."

There are no comments for this post "The evolution of men's hairstyles in Sweden through the years - The Local". Be the first to comment...