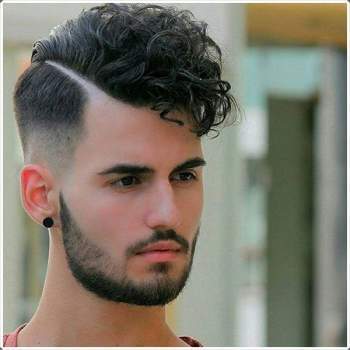 When it comes to men’s haircuts, the buzz cut has been around for a very long time — well over a century so to speak. This particular haircut style has typically associated with men serving the military, but because it now has a huge range of different lengths and iterations, it has become popular among stylish bearded guys too. Beard cut style.

List of Buzz Cuts That’ll Look Good With A Beard

Apart from the style factor, many bearded men prefer buzz cuts due to the fact it is easy, requires low-maintenance, and hides balding issues. Besides, buzz cuts leave barbers and hairstylists alike enough room to showcase their creativity. You can have buzz cuts with either in shaved or faded sections.

Take a look at 33 of the most prominent buzz cut styles with beards.

The induction cut is deemed as one of the most extreme of short buzz cut styles. Popular with the military especially among the new recruits, the induction cut is done if done properly will leave you with a slightly more than a stubble on your scalp.

This buzz cut style is exemplified by its shorter side with marginally longer hair at the top. The crew cut gets its name from competitive rowing teams at illustrious US Ivy League colleges such as Harvard, Princeton, Yale and so on. The crew members sported this haircut to avoid their hair becoming an obstacle during racing. This is not a relevant information to list, but we still put it there in case you are curious.

For most people, the burr cut is hardly distinguishable from the induction cut. We won’t hold any grudges as both are the same thing — technically. Nonetheless, it can still be differentiated by the clipper length which is 1 or 2 times greater than the ones used for the induction cut.

This modern haircut is very popular now and the reason is it low maintenance and feels subtle. This buzz cut hairstyle looks good on anyone including bearded guys. Here are two tips if you want to get this haircut — you can keep it longer for an understated impression and taper all the way down for a more bolder look.

In this particular hairstyle, the edges are done in a way that meets the sideburns and the hairline on either side. The rectangular shape appears clean and edgy.

The skin fade haircut is similar to the taper fade hairstyle aforementioned above except that the hair is shaved right below to the skin. For guys with beads, we recommend you trim your facial hair to the same length as your hair on top. If you have a long beard and don’t want to shorten it, then trim it straight and around your face for a bolder and clean cut look.

8. Creative Shape Up Haircut With Beard

It’s amazing how the razor and clippers have been used to get this look. This hairstyle is creative too as you can go straight, angular or round when shaping.

When it comes to buzz cut hairstyles, the undercut is very much similar to the skin fade, except for one fact. In the skin, fade undercut the shortening of the grades is more sudden. This haircut looks good on people who prefer having long hair at the top and slick it backward.

This is one of the most classic men’s hairstyles around. In fact, the pompadour fade has been around since the 50s! However, this buzz cut haircut has been modernized for this century, hence its new iconic look. If you gents with beard want to rock a slick pompadour, you may want to use a pomade or hair gel.

You can only find a handful of unique and daring buzz cuts bearded men can rock. And the fauxhawk fade is the best and most sought one out there. The fauxhawk fade resembles a Mohawk look, though this one is much better. Just remember to let the hair on the top of your head grow whilst maintaining a short fade on the sides. You can also use a dry product like clay to recreate a more textured fauxhawk look.

12. The Fade Partial Line Up Hairstyle

This fade haircut suits well for men with widow’s peak(s). In case, you can’t recall what a widow’s peak is — it is the spot where the hairline is difficult to straighten. The fade line up is matched up against the lower part of the hairline. Also, a smooth transition is formed that continues to the beard and the sideburns.

13. The Afro Shape Up Fade Style

Many assume the Afro shape up fade haircut as ingenious. Yes, it does feel creative and most of it is derived from the contrast between the hair and the skin color. Besides, the shape of the haircut also makes it awesome to look at.

This buzz cut is ideal for men with round or diamond face shapes. In this particular hairstyle, the hair is styled by combing over with a hard side part. A full beard compliments the overall look.

This hairstyle fares well for the work culture environment. The fade begins from the middle and from there it transits down seamlessly.

In this hairstyle, the long hair at the top is matched against the rectangular shape up at the temples. With no hairs sticking out, the line up crosses to the sideburns, which fades out into the skin fade below.

Another great haircut bearded guys will like is the rollback pompadour with skin fade sides. Here the sides are shaved and the hair is done with a pompadour. However, if you want to rock this hairstyle, you need to have thick hair.

If you have curly, thick hair and long hair on top, this is one hairstyle you can rock. It is similar to the taper cut except the fade is less gradual. Also, it also feels softer than the skin fade. It’s perfect for modern gents who sport beards.

19. High Skin Fade with Shape Up with A Top Knot

The long hair on top tied in knot alongside high skin fade on the sides does create a compelling buzz cut.

20. Short Back And Sides Shaved

Here the sides and the back is shaved after being trimmed short so that all the focus is directed towards the spiked hair on top. The sideburns are also faded to make the hairstyle more artistic.

There you go the coolest buzz cuts for bearded men. All of these hairstyles are simply awesome and anyone can try out this hairstyle with or without a beard. Just ask your barber or hairstylist to follow the picture. That’s all you need to do.