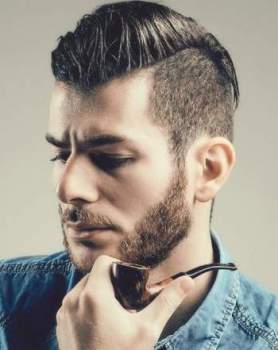 Over the centuries there have been many cultures that have put official or cultural restrictions on how men should wear their hear or groom their beard. In the 1960s men wearing their hair long were considered revolutionary hipsters. 18th century Frenchmen would not have seen anything wrong in putting on a long-haired powdered wig. The cultural heritage of beards, mustaches and haircuts in Albania was strongly influenced by the Enver Hoxha regime (1945-1990). Mens beard hairstyles 2016.

Albania is a country located in the south-east of Europe. It borders with countries such as Greece, Montenegro, Kosovo, and F.Y.R.O.M (Former Yugoslavian Republic of Macedonia), who were once all part of Yugoslavia. It is therefore no surprise that Albania was part of the eastern-European political system, the socialist regime. In fact, Albania suffered one of the most brutal communist regimes of the “old continent” under the rule of Enver Hoxha, the dictator who led Albania and her people from 1945 to 1990.

In 1967, the Peoples Republic of Albania constitutionally declared herself an atheist country and religion was prohibited. Those persons who broke this law could go to jail and face a life sentence or, in the worst-case scenario, a death penalty. One of the more bizarre laws of the 1967 Constitution was the law which restricted an Albanian citizen from displaying any influence of western culture, which included listening to or watching foreign music and television shows, or even having a beard or a certain type of hairstyle.

My father Agron Sulejmani, along with his entire generation, suffered this brutal restriction for almost half of his life. He confesses that during those times people used to watch foreign television or listen to foreign radio illegally, risking prison if they were caught. When I ask him about what happened if someone was brave enough to break the rules against certain hairstyles or even grew a beard, in this way displaying “western culture”, he says that the police could stop him, cut his hair right in the middle of the street and shave his beard. Of course, after this he was taken to the police station where he was beaten and maybe even suffered some jail time.

The display of western culture was so prohibited that there was always a barber at Tirana airport who would cut the hair and beard of those few foreigners who could enter our country. In 1970, on the occasion of a football match between Ajax Amsterdam and Tirana, the Albanian government sent a letter to the Ajax Club Chief Jaap van Praag stating that players would not be allowed to enter Albania if their hair was longer than 4 cm or if they had a beard. Another case exists where the entire Scottish football team Celtic were not allowed to enter the country by the government because all of the players had beards, causing Partizani of Tirana a loss of 0-3 by forfeit. This is just a taste of what my parents’ generation had to suffer during Hoxha’s regime.

Watching a documentary about the current situations in the DPRK (Democratic People’s Republic of Korea), I think about what my parents’ lives used to look like. I am lucky to have been born and to live in a free democracy regime which, even though it has his own problems including corruption, unemployment and crime, cannot be compared to what we have had to suffer before. My generation is free to believe what it wants, to wear what it wants and to have the hairstyle it wants. And now, finally, my parents’ generation is free to voice its opinion and to listen to its favourite foreign music without being worried about going to jail for it.

There are no comments for this post "Beard and haircut restriction during the Enver Hoxha regime in Albania (1945-1990), Heritage Times". Be the first to comment...