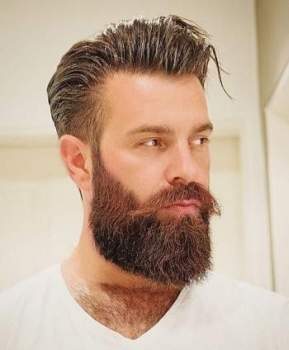 The feature image portrays the mood I like to feel when I look at how men present themselves by the means of how they present themselves to their family, co-workers and friends. I like to see strength, a man at peace with himself and a study of wisdom and confidence. Calmness and serenity abound because he is in control. His grooming standards are a direct reflection of those qualities. If he has a beard, is it maintained and pleasant to look at. Does his hair complement the style of the beard and make him more masculine or less so? Hair style for beard.

The opinions on how to make that happen vary wildly. Ask twenty men that question and you’ll get twenty different answers. Maybe that’s an omen of things to come in this blog post. But, I think not. There will always be men that exist outside the conventional logic and tendencies and move to the extreme left and right. I will give them their due because many men influential in fashion are trendsetters when it comes to hairstyles and beards that deviate from the mainstream. But, in general, women like men exudes strength and calmness. Co-workers like men that enhance the workplace rather than detract from the professionalism that makes businesses successful. Family and friends enjoy the company of the men in their inner circles that they aren’t embarrassed to be seen in public with and not have to make private excuses that he’s “the rebel of the family.”

What we have to consider is the overall appearance desired and how it was achieved. It is somewhat of a subjective evaluation but all of the visual touchpoints must be considered as well as the physical factors. The fact of the matter is that your beard and your hair are not two separate issues. They both meet the eye of the beholder at the same time and have a physical connection as well. They do not exist in two different universes. Well, at least for most men, they don’t. To achieve ultimate masculinity, the entire space from the top of the head to the bottom of the chin must be considered. They are expected to work together. If you need some motivation, consider this … pride is the predominant spirit of exceptional men. Take pride in how your beard and hairstyle work together.

Rugged or refined, what defines your work and living environment? There are a number of ways to approach this.

Does your typical day put you in contact with the public on a regular basis? If that’s the case, then your objective with hair and beard styles is to have one that is inviting and well-maintained.

Maybe your day is spent in an office environment where women are just as common as men. If so, masculinity that leans toward both strength and compassion is the way to think when it comes to your physical appearance. A good hairstyle to complement the beard is something to give patient thought.

Maybe your day is spent outside working in construction or possibly you’re a lumberjack. The rugged look is favored by most men in these kind of jobs. Friends and family may still appreciate a more refined look but there’s nothing wrong with being a combination of elegant and rugged.

Let’s see few images and talk about them for a minute. This first image is a highly refined, high-fashion look. The full beard is light and of variable density across the face and you will notice that the haircut is designed to complement that characteristic quite well. The beard density is matched up through the sideburns and sports an equal length making for an excellent transition to the undercut hairstyle that gradually builds length until you reach the part that defines the top of the head. There, the upswept style frames the face nicely while being well-groomed and not just left to its natural tendencies. With the beard being cropped close to the face and neat in appearance, the top of the head offers a different style that keeps the hair clear of the face so as to display the attractive features of the face without interruption. It’s a very expressive, yet strongly masculine, yet empathetic to anyone he might engage with.

This next style is great for work and play. This style will do well in public because this beard is essentially a stubble style which doesn’t provide clean lines but nonetheless has the panache that exudes confidence. The hair is the perfect match for the distinct part and side swept, clean look about it. The undercut side style allows for the physical and visual coordination that blends the hair with the beard. That make the overall appearance suitable for a casual day out on the beach and easily conforms to a day meeting with fans and friends.

This next example is a great one to establish what it means to be rugged and still be acceptable to the audience that follows you. I would call this a trendsetter look because the style makes the man recognizable from any distance. You see him from a distance and you know who he is just by seeing the hairstyle and beard. The full beard is trimmed along the chin but the lines of beard are not clean and distinct. The long hair works in this combination because it keeps clear of the face and beard for the most part with only enough of a transition from beard to hair to keep connected. This guy gets special dispensation because he creates this appearance to be different and identifiable in public. That’s the nature of being an actor.

Some men do certain hairstyles because of the uniqueness of their ability to grow facial hair in very dense, moldable ways. The beauty of this next image is the genuine effort to trim, shape and mold this beard and hairstyle into the perfect example of masculinity and strength. It doesn’t follow any socially accepted practices. It is meant to be an individual statement of who I am. Note the clean transition from full beard to a distinct undercut hair style whose lines are as sharp as those of the beard. The face is perfectly framed by the swept-back style that is in direct contrast to the natural appearance of the beard. The shape of the beard is conical almost like a goatee to a point directly below the chin, giving the man giving him total control to decrease the length of the beard as it approaches the ear the blend directly into the hairstyle naturally and completely.

We’ve seen a wide variety of beards and the hairstyles that work in concert with them to produce the desired look and personality of the man. Two things come to mind when a man is thinking about growing a beard. The motivation to do it must be strong and focused. The patience to stick with it until the attempt is fully mature is absolute.

The first thing you need to decide is what type of beard to grow. Regarding doing that, face the reality that when it comes to beards, not all men are created equal. If your facial hair is sparse and not conducive to filling in completely, a stubble style is probably your best bet. Stubble works with just about any hairstyle because the only connection is a visual one.

If you’re more of a localized kind of facial hair growth kind of guy, it usually happens under the nose and on the chin. The cheeks are where it won’t grow. In that case, a mustache and goatee are called for with a short undercut style haircut to complement the goatee’s close to the skin grooming style.

The key point is is don’t be afraid to experiment. You won’t know what kind of beard you can grow until you try. However, experiment when you’re out of the public eye for a few days. Try it out on family over the Thanksgiving or Christmas and New Years holidays. Believe me, they will be brutally honest with you about how it’s going. That way, you can go clean-shaven without enduring public ridicule and embarrassment.

Men’s Hairstyles with Beards: Wrapping it Up

Once you know your face and how the hair grows, feel free to tackle a different kind of beard over time. A full beard in summer can be hot and uncomfortable. It might be the right time to shorten it up a bit and let the air get to the skin. Shorter beards also appear to be more elegant to those around you.

Itchy skin can be a problem once you’ve grown a beard. That’s normal because the skin drys out under the beard and begins to itch. Put some oil or wax on the beard and rub it in well. The skin below the beard will benefit from the oil and stop itching.

Top 7 Most Common Beard Shapes – Which One Best Suits You?

A Look At The Neck Beard: Is It A Real Beard Style Or Not?

There are no comments for this post "Mens Hairstyles with Beards: Separate or Coordinated? - iManscape". Be the first to comment...