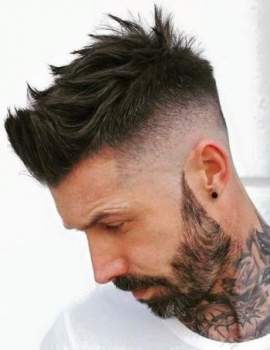 If there’s one versatile haircut out of all men’s haircuts available, then that’d be the undercut haircut. The undercut is a simple haircut. You choose one single hair clipper length (known as a guiding comb) and you buzz all the hair on the sides and back of your head. Done! Men's haircut and beard styles.

Getting an undercut with a beard: a new trend

While the undercut has been a trendy haircut since 2011, the full beard style (also known as a hipster beard) has only been a trendy style since 2013. In 2013 and early 2014, the hipster beard was combined with mid contour haircuts, executive haircuts and short taper haircuts (heck, I even did some fade haircuts for some of our barbershop customers back then!). However, by mid-2014, the hipster beard trend changed to incorporate an undercut. So no longer were we barbers now cutting taper haircuts with a hipster beard, it now was time to buzz an undercut to disconnect the beard from the hair on the top.

You see, all taper haircuts are a form of a disconnected haircut. In fact, the taper haircut itself is a measure of a barber’s skill. If you ever find a barber who can cut a good taper, then you’ve find yourself a great barber for life. Having said this, the undercut is the ultimate disconnected haircut. The hair on the head simply “disappears” at the temple level and all the way down the sides and back of the head. Then the hair appears again (so to speak) at the sideburns. Hence the hair has been “disconnected” for a good distance, namely the sides and back of your head have served to disconnect the hair on the top of your head from your facial hair and beard.

I will give you below a very-recent example of an undercut with hipster beard style. You can see how the hair on the top, left at two inches of length and with a minor smoothing of the edges, stands out more with the undercut. Likewise, the full beard style stands out more as the hair on the sides and back of the head are much shorter than the hair length of the beard. It’s all about the contrast in the undercut and giving the illusion of thicker fuller hair by placing more emphasis on the top and facial hair via the undercut. Just like I told you a the start of this article, the undercut is one versatile haircut for dudes!

There are no comments for this post "Great Undercut Haircut with Hipster Beard Style - Best Hairstyles for Men". Be the first to comment...