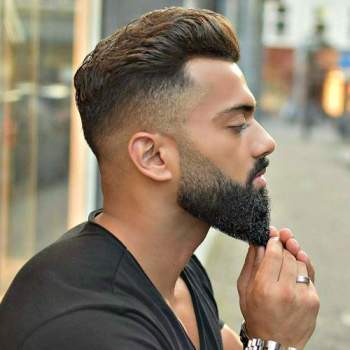 Looking to style your hair like Chris Hemsworth? Hoping to shape your beard in the same way as Thor? Trying to vibe the look he has in movies? Beard cut.

If the answer is yes, you’ve come to the right place. I’m a huge fan of Chris Hemsworth. I’ve been watching his films ever since his first movie – way back in 2002 in the flick, Star Trek (rebooted).

You remember that one, right? It was the film starring Chris Pine in his debut of Captain Kirk. Hemsworth played the role of Kirk’s father, George Kirk.

Since that time, the Australian born actor has become a megawatt celebrity. His most notable role has been Thor; a series inspired by Stan Lee in Marvel’s Cinematic Universe.

Women are interested in him because of his body. Guys follow him because they want to know about his workout plan (see this post on building muscular strength to learn more.)

Additionally, men also want to replicate his hair and style in ways that are similar to how he looks in the Thor films. Given interest in this specific topic, I thought it might be cool to put together a post that helps readers achieve this result.

Let’s start out with some basic background information on this actor and then move on to the reason you came here; to learn about styling yourself like Chris.

FYI: Video below is of his workout for Thor – but it gives you a good idea of his beard and hair style.

Body Type: Not your usual ectomorph

To begin with, it’s important to understand that the Australian born actor historically has sported a longer hairstyle. It’s only been recently that he’s started to go shorter.

Given the reaction by fans, followers really seem to dig it. So, the question becomes:how to style my hair like Chris Hemsworth? The answer to that question is easy – perhaps too easy.

In studying the guy’s haircut, it looks like he has a barber use a set of clippers on the side, starting with a half guard at the nape going up two-inches past the top of the ears.

The barber then likely changes to a number one setting and goes the rest of the way up. It’s possible a switch is made to a number two blade towards the top (although I doubt it).

For the top of his head (crown), it looks like it’s style with a classic crop cut. In other words, the length is shorter at the back and may get longer towards the front. But the overriding feature is a “box cut” meaning the hairstyle itself frames the actor’s face.

Honestly guys, it’s probably one of the easiest types of haircuts to get. When you talk to your barber, just tell the person you want:

1. a fade on the sides going short at the bottom and longer going up.

2. a crop cut on the top with a little extra length in the front

One thing about Chris’s hair is that he partially combs it to the side. Part of the reason is that his hair is naturally wavy. While I can’t be sure, I have a feeling it’s cut at an angle to give him texture.

Additionally, Chris appears to have a full head of hair. This is being mentioned because it affords the actor many styling options.

But what if you are a man that is losing hair or thinning at the top? Can you still style it like Thor? The answer is yes but it will require that your barber know how to blend and texturize without chopping everything off.

As an aside, notice that I have used the term barber in this post. There’s a reason for this. Barbers are specifically trained on how to use clippers and style men’s hair. This isn’t to say stylists don’t know how to do this. Many absolutely do.

But barbers are trained in old-world ways with a history that dates to the time of the ancient Greeks and Romans, circa 296 BC (Moler, 1928). Translation: Barbers are professionally trained in the art of men’s hair styling.

A question many people wonder about is Chris Hemsworth hair coloring. In looking at the pictures, it’s unlikely he uses any permanent type of dye. His beard is another issue, which we’ll get to in a bit.

That said, it is very possible Hemsworth uses a camouflage product that gives him different tones. If you look closely, it’s dark blonde in some places and lighter in others. Does that mean he uses highlights? That’s doubtful.

If I had to guess, he likely rinses his hair with a product like John Frieda’s color glaze for blondes ( see Amazon ). What’s cool about the glaze is that it doesn’t deposit permanent color. Instead, it simply brings out the natural colors of what you’ve already got, infusing tones where they organically appear.

You only need to use something like the glaze two or three times a week. Simply apply after conditioning and rinse out. Pretty simple, huh?

Well, that’s it. Everything mentioned above is likely how Chris styles his hair – short and cropped.

A lot of guys really dig how Chris’s beard looks and want to adopt something similar for themselves. Doing so isn’t all that hard but will require planning.

In looking at his photographs, it appears the actor lets his facial hair grow out for a good 5-7 days. This allows any patchy areas to fill in. Additionally, he’s able to trim his beard optimally.

At its core, he wears a standard short beard style. Obviously, I can’t be totally sure but I suspect he trims it in the following ways with a facial hair tool.

1. At the top of his sideburns, he likely sets the guard to either a 3 or 3.5. Using downward strokes, he goes down halfway to the top of the jaw.

2. He then (likely) sets the trimmer to level 4 and slightly blends and shapes, allowing for longer hair along the chin and jaw; taking on the appearance of a near-goatee.

To keep it real, I have no earthly idea the brand of trimmer he uses. But if I had to guess, I’d lay odds its likely something like Panasonic’s All-In-One Milano ( See Amazon for price ).

It’s rechargeable and allows for freedom of movement because the user isn’t tethered to a chord. I personally use this tool and have been very pleased.

At any rate, once he has his beard styled, it’s just a matter of maintenance. If he trims and shapes more than two times a week, I’d be surprised.

When you look at Chris’s beard, it’s a cross between a dark blonde or medium brown. It just depends on the lighting. But what’s it’s not is light; a belief that many people think is true because of the hair on his head.

So, how does he achieve such even coloring? Is it natural or does he use a product? If you ask me, I believe he’s applying something like Just for Men beard coloring. At the time of this post, Chris is in his thirties; a time in life when grey hair increasingly begins to creep into whiskers.

That’s why I think he’s using something like M-30; a Just for Men coloring designed for guys who want a light to medium brown look ( see Amazon ).

At this point, I don’t think he dyes it more than once a week. Maybe twice if he’s filming a movie or has some type of event. As he gets older, this will likely change if he wants to keep his look consistent.

Bringing It All Together

The man who plays Thor styles his hair and beard in a very basic, straight forward way. It’s a fade on the side of his head and a crop at the top.

His beard is short but longer towards the jaw and mouth area. This is an easy look to achieve for most men, regardless of age. Upkeep is easy, except for regularly needing to get the sides faded. Much depends on how fast your hair grows.

I hope you found this guide useful. Thanks for stopping by.

There are no comments for this post "Chris Hemsworth (Thor) Hair and Beard Style Guide - Guy Counseling". Be the first to comment...