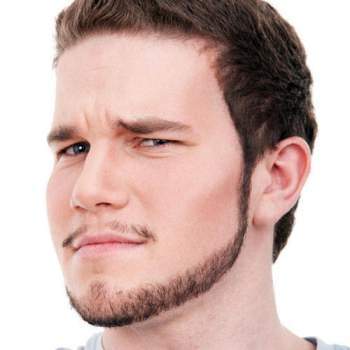 Facial hair was big in the 19th century. Look at paintings or photographs from this time, and chances are the men will have beards, moustaches or sideburns – and sometimes elaborate combinations of all three. Men's facial hair styles.

For much of the century, the emphasis was on beards and ’burns. Big hairy beards were all the rage in the middle decades. The bushier the beard, the more virile the man, some people believed. In an age as obsessed with health issues as our own, some people claimed that good beards meant good health.

Cultural or religious practices meant some men grew, or did not grow, facial hair. As the art of moko (or facial tattooing) declined in Maori society from the middle of the century, more Maori men grew moustaches or beards. Christian missionaries had argued that moko were heathen, so some Maori men let their facial hair grow to cover their tattoos.

A more clean-shaven look was in fashion from about the 1880s. Moustaches came into their own. The shaggy ‘walrus’ style had the hair droop luxuriously over the lip, but other styles demanded a lot of care. The ‘Imperial’ – modelled by European royalty at the end of the century – required men (and their barbers) to shave and brush the hair up the cheek.

Even more dedicated care was needed to carry off the ‘handlebar’ moustache with any panache. This style took its name from the handlebars of push-bikes, and to get that same look, men would trim and wax the moustache into shape.

Advances in technology nudged fashion towards the clean-cut look – from the 1880s men could use safety razors instead of strops and blades — but styles for facial hair also tell a story of changing ideas about men and masculinity. Being without a beard gradually became seen as a sign of a civilised, modern man. Whiskers were fine in the bush where men could not be expected to shave every day. As New Zealand became more urban, though, and society demanded that men be more respectable, the beard, like the rugged frontier, was left behind.

It was only a matter of time before the moustache went the same way as beards and sideburns. An entirely smooth face was becoming the norm by the 1910s. The First World War hastened the hairless look. Men who spent weeks in the mud and grime of trenches relished the chance to wash and shave in clean water, and after the war, the shaving trend continued.

The 1920s brought an emphasis on personal hygiene. A sleek hairless face was the ideal look for men. And hairlessness became fashionable for women, too; this is the time when clothing styles showed more of women’s bodies, and shaving underarms and legs began in earnest.

Another world war and the discipline of military life kept upper lips smooth. There were exceptions: sailors could get permission to stop shaving and grow a ‘set’, and the moustached pilot was common in the air force. The groomed Hollywood star look, so beloved of Kiwi men in the 1950s, was clean-shaven with short back and sides. This took some effort. Women may have gone to the hairdressers every week or so to get their hair done, but men were just as fussy; they shaved daily and had a weekly hair trim from the barber, Mum, their wife or a mate.

Being without a moustache and beard may have set off a strong masculine jawline – in theory if not in reality – but by the later 1960s a generation of men had had enough. The clean-shaven look stood for conservatism and old-fashioned values; a younger generation wanted the freedom that the world seemed to offer. Moustaches returned as men wore their rebellion as a fashion and lifestyle statement.

The 1970s and early 1980s were another heyday for the moustache. No longer was a hairy moustache an outward sign of disaffected youth. Every second man seemed to have a moustache. From the sports field to the state service, the trend was towards big and bushy as moustaches seemed to symbolise a rugged manliness. Was it just a coincidence that this happened at the same time as the women's rights movement got under way?

New styles also came in, heavily influenced by American fashion. The droopy, sinister ‘Fu Manchu’ and pencil-thin Italian ‘tash’ both owed some of their popularity to kung fu, gangster and Mafia movies of the time.

The moustache craze did not last much beyond the early 1980s, but pockets of people with moustaches hung on – often in uniformed services, such as the Police, the Fire Service or the armed forces.

For some in the gay community coming out in the 1980s, moustaches were an iconic symbol of identity. Inspired by singer Freddy Mercury or bearded ‘Bears’, gay men wore their facial hair with pride.

Men continued to experiment with their facial hair as a fashion statement, but beards and sideburns largely won out over the moustache. The All Blacks of the 1990s and 2000s – conscious modellers of style compared to their forebears – sported all manner of head and facial hairstyles, but moustaches on their own were largely a thing of the past.

Barbers put the changes down to lifestyle. ‘Coffee and lattes don’t mix — all that froth gets stuck in the moustache so something had to go,’ one Wellington barber said to the Dominion Post newspaper late in 2006. The moustache barely rated in the appearance stakes for the style-savvy metrosexual of the early 21st century, though they have made a come-back since 2010, perhaps influenced by the growing popularity of ‘Movember’.

There are no comments for this post "A moustache timeline - Men and their moustaches, NZHistory, New Zealand history online". Be the first to comment...