Beard model. What Beard Style is Right for Me? - iManscape 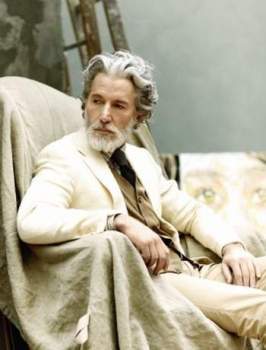 What Beard Style is Right for Me? If you’re anything like me, you’re always experimenting with your beard to see what looks best. Your mirror is your best friend, well, sometimes anyway. The fact that you keep experimenting means something. It just never seems like you have it right. So, the mirror is really only useful for seeing the results of your endeavor. It doesn’t do much in the way of telling you what to do. What beard style is right for you depends greatly on the shape of your face. Thus, we spend the first part of this blog post talking about faces and employing the mathematical principles of geometry to the effort. Beard style for me.

I’ll bet you were one of those people that couldn’t understand why they made you study geometry in school. I remember the justification used in stating that question, “I’ll never use this in real life.” Well, the truth is that your face has a geometric shape that, if you understand what it is, will determine what beard style to wear and how to trim and groom it for maximum benefit to you.

First, let’s answer the question about what kind of face is most desirable for a man. I didn’t jump off this bridge on my own. I consulted the oracle of men’s face styles, Craig the Barber. It is his expert opinion that the most desirable face type is square with oval coming in at a close second. Why? Hey, it’s a statistical thing and who can argue with statistics? Come to think of it, Mark Twain has a little saying, “There are lies, damn lies and then there are statistics.” My point is, just roll with it. My personal take on that is that a square face is proportional in every way. Who can bad mouth proportionality? Everything else is flawed in some way.

Here we have an example of a square face. The characteristics are simple to understand. All four sides of the face are equal in length with an internal angle of 90 degrees at each corner. That definition comes from the website MathisFun. I wouldn’t want anybody, not to have some fun while going through this progression of mathematical trivia.

In any case, you can see the proportionality of the shape and the fullness of the features. When growing your beard, you’re not trying to correct some oddity of shape, so you’re free to keep it close trimmed and neat to improve masculinity. The look you seek is to accentuate the square jaw with some distinct, visible lines.

The oval face is a shape you can’t go wrong with so far as beards are concerned. So long as you can grow facial hair, patchy, thick or whatever, you can create a look that will be pleasing. You can clearly see the distinction of the oval face as compared to the round face above. Again, from our friends at MathisFun, we get this insight into what oval is, “An oval or ovoid is any curve that looks like an egg or an ellipse.” Practically speaking, the length from scalp to chin is longer than the width from ear to ear.

You are free to go wild and crazy with a bear style with this shape of the face. Just remember a few basic rules of facial hair. Keep it clean, trimmed and well-groomed so that the people around you enjoy it as much as you will.

Beginning with the round face, we are starting to meet some beard styles that alter your appearance. The clean-shaven round face gives most men a chubby look because there is little to no definition of the lines of jaw and cheek. It sort of all runs together in one continuous shape.

A beard with sharp angles and definition is needed here to soften the roundness of your appearance. The range of beard styles focuses mostly on beards that provide chin definition such as a goatee and its many variants such as Fu Manchu or the Van Dyke if you want to incorporate a mustache in the mix. If you desire to go after the jaw and cheek line, you can give a chin strap a shot and see how it looks. This will be a high maintenance effort since the beard lines must be kept razor sharp and angular to complement the face.

The rectangular face presents the exact opposite challenge from the round face. The presence of natural angular features needs to be softened a bit. The rectangular face is longer than it is wide. It’s the width that you’re most concerned with because the width of the face is constant across the forehead, cheeks, and jaw. MathisFun says it this way, “A 4-sided flat shape with straight sides where all interior angles are right angles (90°).” It’s the flatness of the shape that demands the most attention with a beard style.

Any beard style that will deemphasize the strong angles is called for here. If you’re a Trekkie and like the character Worf on Star Trek, that type of beard works well here. The more standard style such as the Ducktail also addresses the features that need some toning down. Something a bit fuzzy but trimmed nicely and kept short are some good general guidelines to follow.

The last of our fundamental geometric face shapes is the inverted triangle. MathisFun calls this an equilateral triangle where all sides are equal in length and the interior angles deviate from the 90 degree look to a 60 degree look. The face looks out of balance and a beard can correct for that type of challenge and bring some fullness back to the cheek and jawline in an attempt to create that square look that everyone seems to like.

Your best chance of making that happen is with a full beard that mutes the angular shape to the point of the chin with a substantial growth of facial hair that puffs out the cheeks and hides some of those sharp angular lines. The limitation for most men here is the ability to grow facial hair in the first place. You need a genuine full beard that will fill in completely. Any patches of small facial hair such as a goatee or soul patch only accentuates the largeness of the face. Like I said, it’s a case of experimentation and patience. A full beard takes time to grow and shape. If you’ve never had a beard before, give it a chance. It may take several weeks before you know if it will fill in or not. Yeah, you’ll look a bit scruffy for a while, but bear with it.

Let’s move on from our mathematical trivia focus and talk about other features of the face shape that could use some help with the right beard. Most of these are variations of the five basic shapes already discussed. These are the faces that require some creative input and experimentation until you achieve the look that complements your overall appearance.

The large face is a variation of the round face where the dimensions of the face are wider and longer giving the face shape an unbalanced look. We already know from talking about the round face that the approach needs to be one of establishing some angular definition. This is one of those cases where you have to “go big or go home” when it comes to growing the right type of beard that works with what you have in the way of natural features. A small growth of facial hair such as a goatee or soul patch will create even more of an unbalanced look and actually make the face seem larger. Thus, you’ll want to work with the full beard and its many variations.

The idea here is to make the beard the focal point of the face and draw attention away from the largeness of it. So, a full beard such as a Hollywoodian, French Fork, Old Dutch or even a Ducktail with some significant length will work.

The small face, on the other hand, requires just the opposite treatment. It’s very easy to overpower the face with a mass of facial hair that just hides the face almost entirely. All you end up seeing is two eyes and a mouth that becomes visible only when you start to speak or eat.

The disproportionate appearance can be very distracting. I don’t know if you’re a movie buff or not but the character “Thing” from the Addams Family comes to mind. That makes me shudder a bit. In any case, go small with your facial hair with a small face. Stick with the various forms of a goatee, Van Dyke, Soulpatch or maybe a thin chin strap if you’re feeling adventurous.

I made a bit of a deal about this at the beginning. There was a reason for that. The mirror tells all and sometimes in a not so flattering way. There is a way to turn the tables on the brutal truth of reality that the mirror imposes on you.

Use it to figure out exactly what kind of face shape you have. That is fundamental to being able to determine what beard style is right for me. Here’s what you do. Stand a slightly less than arms length from the mirror. Make sure your hair is completely pulled away from the face so it’s shape is revealed. Wet down the hair, if necessary, to get it to cooperate. Make sure you have a Sharpie handy. Once you’re settled and ready, draw an outline of your face on the mirror using the Sharpie.

Use your best judgment and settle on what shape your face actually is. Use a tape measure and figure out what the length and width of the face are at various points across the forehead, cheeks, and jawline. You just might be surprised.

A Look At The Neck Beard: Is It A Real Beard Style Or Not?

There are no comments for this post "What Beard Style is Right for Me? - iManscape". Be the first to comment...