Beard line. 90 S MEN HAIRSTYLES ARE BACK AND BYE TO HIPSTER BEARDS - termix-inglestermix-ingles 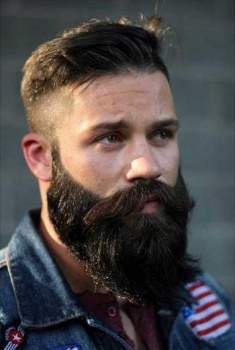 Hairstyles with a lot of volume and strong makeup. The 90’s have strongly inspired fashion as well as men’s haircuts and hairstyles. Both the well-known hairstyles of Kurt Cobain with his blonde medium-length straight hair in his purest “grunge” style and Will Smith’s in “The fresh Prince of Bel Air” are back. As far as beards are concerned, it seems that we have seen off the hipsters for good to welcome the ‘yuccies’.

The 90’s decade drew its inspiration from the hairstyles of the artists and celebrities of that time. These are back for the upcoming season although this time, with some changes. The trends were exemplified for instance in the Fígaro Awards 2016, granted the past 7th of november. Men's facial hair styles.

Kurt Cobain’s loose medium-length hair is one option of the hairstyle. Another option is to tie back the hair braiding it in the famous Boxer Braids. Another of the main features of the 90’s was the unisex style.

The flat top hairstyle was popularised by Will Smith with the sides of the head faded. In order to achieve this hairstyle you need a hair clipper such as the new Power Cut that incorporates interchangeable combs and intermediate blade numbers for a perfect fade. Dry the upper area in the direction of the hairstyle and cut the hair with the use of a hair clipper for contours such as the Styling Cut hair clipper.

At the end of the 90’s and at the beginning of the new millenium the medium-length haircut became the number 1 hairstyle. Especially the one with razorcut sides and longer upper area, that would be first straightened and later waxed. To successsfully straighten we suggest you use a hair straightener with narrower plates as is the Termix Slim flat iron. You will achieve this way optimum results without risk of burns.

The medium-length hairstyles were also very successful in the 90’s. The pictures remind of the gothic or emo styles that became trendy at that time. Now they are back.

And the famous bowl cup is fashionable again! Remeber a member of the Backstreet Boys that popularised it. The sides are razorcut while the upper area is left longer and perfectly straightened with polished lines.

As you can already see in the pictures, the top tools for the winter so as to achieve the bowl cup are hair clippers with intermediate blade numbers like the new shavers Power Cut and Styling Cut and the Slim flat iron.

AND HOW TO HAVE THE BEARD?

The next trend opts for leaving the face more visible and move away from thick beards. Although if you wish to keep your beard, the three-year beard is still accepted. We welcome the so called Yuccies.

The word stems from the acronym Young Urban Creatives. Like the name says they are a group of urban, cosmopolitan and creative young guys who have decided to renounce to a comfortable and stable lifestyle in favor of a major expressive ability and bigger freedom. They are half way between the yuppies and the hipsters.

How to identify them?

One of their passions is the bohemian lifestyle and that explains why their outfits are so casual.

They prefer no to devote so much time to the beard daily and only shave it after 2 or 3 days. Having a beard is this way likely to disappear.

Yuppies don’t care much about having 3-days beards if they were not able to find the time earlier. But what looks like a careless style, hides some beard care. As yuppies have their 2/3-day beards and retouch it every week with a shaver and a 3mm blade. The contour shaver is ideal for this kind of thing, as you can adjust the length and it has a special head for small areas like the nose or the contours around the lips.

There are no comments for this post "90 S MEN HAIRSTYLES ARE BACK AND BYE TO HIPSTER BEARDS - termix-inglestermix-ingles". Be the first to comment...