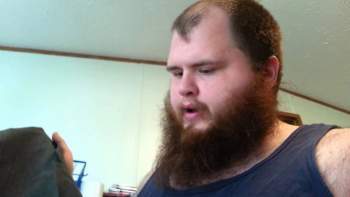 The neck beard is by far the most underrated beard style among any other. Although commonly associated with gamers and heavyset men, when styled properly, the neckbeard can be very stylish and modern look for the youthful men of today. Neckbeards can be sported either long or short. Depending on the growth pattern of your beard, you can customize the look accordingly. So whether you are a corporate businessman or a professional gamer, here are 25 cool and simple ways to style your neck beard. Neck beard.

These neck beard styles are perfect for men who want to achieve a more conservative look with their neckbeards. While neck beards are often sported long and gaudy, these options give the beard a more office-friendly, everyday look that is easy to maintain.

This version of the neckbeard offers a clean shaven face, leaving the hair on the neck and below the chin short and moderately thick. This gives a more polished look to that can be sported by anyone.

This neck beard is reminiscent of 5’oclock shadow, featuring a neckbeard that has been trimmed down very close to the skin. This is a great way to sport a neckbeard if your hair doesn’t grow in thick, or is patchy in nature because it gives you the opportunity to mask the patchiness by being so short.

3. Extended up into a Chin Strap

Another way to style your neckbeard is by extending it up into a chin strap. This will give you a little bit of hair on the chin if you are partial to keeping your chin covered. Just shave the face clean, leaving the mustache, and trim the hair along the jawline to form a chin strap.

This look is reminiscent of the last, but the hair on the chin is shaved off and the neckbeard is styled to mimic a lower version of the chin strap.

Lebron James is sporting a more modern version of the neckbeard by extending it up to the tip of the chin. This gives the jaw line a fuller look while still bringing focus to the neckbeard, itself.

This neckbeard is short in length but thick in density, giving the wearer the best of both worlds if he’s looking to create a more prominent style to wear every day. To achieve this style, shave the face and sideburns clean, leaving the beard to hit just below the chin.

If you’re not into a conservative style beard, then these neckbeard options may be for you. While they are not too long or full, they offer a style that makes it look like you didn’t even have to try. Here are some carefree looks you can achieve with your neckbeard:

This neck beard features a more carefree look, allowing the beard to remain fuzzy and somewhat untamed. If you’re looking to sport a neckbeard but still want a substantial amount of hair left on the chin, then this style may be the perfect choice for you.

Mimicking the last style, this neck beard features a more trim beard that extends up to the chin and sideburns.

This neck beard features a clean shaven face and sideburns, leaving the beard just under the chin and along the jawline. While the hair can be trimmed down further, this style leaves the beard long and thick for a more grizzly appearance.

This vintage look styles the neckbeard as thick and short, as it extends up into the sideburns. The look is tied together with a cleanly coiffed hairstyle.

Here’s another vintage neckbeard style similar to the previous one. This neckbeard, however, shaves the chin completely clean, only leaving hair on the neck which extends up into the sideburns.

This unique style features sideburns that have been styled to mimic a keyhole-type of effect around the ear. The face and chin are both shaved clean, while remaining the sideburns intact. Then, the hair around the ear is carefully trimmed away, leaving a keyhole effect.

The Big and Grizzly Neckbeards

These neck beard options feature many disheveled looks for the man who likes to embrace the untame nature of his facial hair. If you’re not particularly worried about shaping and styling your beard, here are some great carefree neckbeard options to choose from:

If you’re into rocking a really thick, untamed beard then this neckbeard style could be for you. This beard style offers a cleanly shaven face coupled with neckbeard that extends up to the tip of the chin, leaving the hair thick while still maintaining a moderate length.

This historic figure sports a neckbeard that has been grown out to a moderate length. The face and chin are shaved clean, while the beard is left attached to the sideburns which are actually disconnect from the hairline.

This neckbeard has been left to grow out to a medium length with a face that has been shaved clean to just below the chin. Giving a unique look to the neckbeard, the sideburns are allowed to also to grow out thick.

If you want to leave the majority of your beard hair intact while rocking your neckbeard, then this style would be a good option for you. This look shaves the face down to the chin and leaves the rest of the beard to grow freely.

17. The Short but Free Neckbeard

Here’s a more modest version of a grizzly neck beard. Shaving the face and chin clean, the beard is left to grow on the neck and up into the sideburns. Although the hair is trimmed short, this is a good option for those who cannot achieve a fuller beard.

18. Only Neckbeard, Leave the Mustache

Another unique way of styling your grizzly neckbeard is by pairing it with a mustache. If you’re a man who can’t stand the thought of shaving your mustache off but still want to rock a neckbeard, this may be the option for you.

The neckbeard ahs been something closely associated to heavyset gamers since they recently popped back on the scene. In order to achieve this version of the neckbeard, shave the face clean, leaving the beard to grow freely under the chin. You can choose to trim it to a moderate length or let it grow as long as you please.

Go Hard With Your Neck Beard or Go Home

These neckbeards are for those who don’t mind rocking a particularly gaudy look. They are the longest, thickest neckbeards to grace the internet and can really only be attempted by those with the highest self-esteem (or sense of humor). Here are the most extravagant neckbeard styles to be found.

This vintage version of the neckbeard shaves the face and the majority of the neck clean, leaving the beard towards the lower portion intact. Also, instead of remaining attached to sideburns, the beard extends behind the ears, towards the nape of neck.

This unique neck beard mimics a collar, as it sits toward the base of the neck like the style above. To achieve this style shave the face and majority of the neck clean, leaving a collar-like beard to sit above the chest. Trim to the beard to whatever length you desire.

This awesome neckbeard also extends up to the chin and remains attached to sideburns. The key to achieving this is maintaining a full, thick beard. If you want to look like an estute professor from the 19

century, then this look is definitely for you.

Here’s an exceptionally exquisite neckbeard that extends from the base of the chin. The face and sideburns have been shaved clean while the hair below the chin has been left to grow long and unruly.

This neckbeard has been featured in Ripley’s Believe it or Not as the longest ever recorded. This style is achieved by shaving the face and chin completely clean, leaving the beard on the neck, exclusively.

Some Neck Beards You Can Actually Try

Many of these neckbeards are really cool but need guts to wear. Choose a suitable beard that will go with your face shape and size. Let us know which neckbeard style is your favorite.

There are no comments for this post "70 Cool Simple Neck Beards for Men BeardStyle". Be the first to comment...