Beard grooming styles. What s Cool About Scruffy? Why Some Men Go Unshaven - 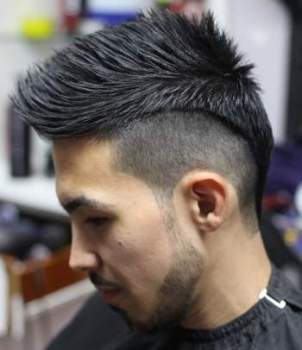 Hair, in the world of fashion, comes and goes. At this point in time, it is in style, particularly on men’s faces. But not lengthy. Just scruffy. And, like most fads, probably inexplicable.

Male models, Hollywood celebrities, athletes and even men in the corporate hallways of the western world are among the trendsetters who have adopted the permanent 5 o’clock shadow as part of their image.

Known by various other names – the David Beckham look, the scruffy look, the three-day beard look and the 1.5- or 2.5- millimeter beard – the trend first captured the attention of fans of the 1980s “Miami Vice” television series.

“It’s a chic-casual look for men, which allows them to appear relaxed,” said Anderson-Smith, who is past vice president of the Association of Image Consultants International.

In the first half of the 20th century, men of fashion either were clean-shaven or wore a trimmed beard or mustache. By the 1940s and Ô50s, a professional man would seldom, if ever, enter the workplace without shaving at least once a day. Prominent stubble was often considered a sign that the man had never made it home that night or that he was taking a day off from work.

Statues of Alexander the Great and members of his army depict clean-shaven faces, a radical departure from the classic Hellenistic beard. Historians have speculated that Alexander ordered his men to maintain a clean-shaven face because a beard and long hair could offer a handhold to an enemy during battle.

The Roman army also adopted the clean-shaven face as a standard. In fact, in ancient Rome, at age 21, men celebrated their manhood with a first-shave party.

Fast-forward to the beginning of the 20th century. From about 1890, members of the European military were clean-shaven. Hygiene and head lice are cited as motivating factors that caused the demise of the 19th century’s full-beard fashion.

“The casual look has gained popularity with the institution of casual Friday in the workplace,” said Anderson-Smith. “The requirement of formal attire in some professions remains, but because of the media popularizing celebrities, many professional men have adopted a more relaxed appearance.”

Anderson-Smith noted there is a difference between a planned casual look and an unplanned, unkempt look. As an image consultant, she works with professional men and women to help them develop a comprehensive, unique look that is, in essence, a form of personal branding.

Creating and maintaining a personal brand or image involves more than attire, hair styles or facial hair, she said. In addition to outward fashion, Anderson-Smith trains clients in etiquette, civility, communication and the intricacies of corporate culture.

Although the adage “Don’t judge a book by its cover” encourages people to move beyond simple appearances and get to know the real person, it fails to acknowledge a psychological reality. Studies have determined that within 15 seconds of meeting for the first time, people form lasting impressions of each other. Those first impressions are very difficult to overcome, especially if they are negative.

Bob Hollander, a therapist and partner of Relationships Work, a relationship counseling and coaching firm with offices in Westminster and Owings Mills, said that adopting a Beckham look, or any fashion trend that departs from the mainstream, will make an individual stand out. It is basic human nature to react to differences.

“It really comes down to how it’s going to make other people feel,” Hollander said. “A cool look, if it fits you and makes you feel good about yourself, seems to be consistent with your personality and is not done in an incongruous way, can be fine. If not; if you are trying to be too cool, people will find you out.”

Hollander said it is not simply a matter of aesthetics. Any look will work as long as the individual is confident and has strong self-esteem.

“It really depends on your profession and people you will be meeting,” Hollander said. “Sometimes it might be an encumbrance and might not be considered conservative enough. That’s where your personality takes over. If you are not secure in the look, you may even react to negative feedback on a subliminal level. You need to own that look.”

It goes without saying that some men can pull off the permanent 5 o’clock shadow and be seen as trendsetters. The trendsetters are generally young, athletic, well-dressed, confident individuals who can make the look work for them. It may not suit older or less athletic men.

Facial structure is another consideration, said Jody Siu, of the Salon at Jodi’s in Westminster.

“There are many ways to go with the style,” said Liu. “It depends on other aspects of how you look, including your bone structure, your weight, your hairstyle and how you dress. If a scruffy look is done correctly by a stylist it can look very trendy.”

Maintaining a designer stubble can be achieved by using one of many varieties of hair trimmers made specifically for grooming facial hair, said Siu.

To keep a beard at the desired length requires shaving every couple of days. The goal is to choose clippers that can be adjusted to preferred stubble length. Just like a clean shave, designer stubble requires attention.

A daily close shave is actually good for the skin’s health, said Dr. Lawrence Feldman, a dermatologist with the Carroll Hospital Center. Much like a cosmetic chemical peel, the razor removes the uppermost dermal layer, which promotes new skin replacement.

Good facial hygiene, whether a man is clean-shaven, sports stubble or a full beard, is the first step in maintaining an attractive and healthy face. If an individual has skin problems, such as acne, those conditions should also be treated as part of maintaining skin health, Feldman said.

“Curly facial hair can sometimes cause pseudofolliculitis barbae, a skin condition caused when curly hair grows back underneath the skin,” Feldman said. “It is sometimes called a hair splinter. It works under the skin and causes a foreign growth, an abscess or boil.”

Feldman said keeping one’s face clean helps prevent infections and odors. Shaving “does make the skin look better.” As long as the face is kept clean and there are no skin problems, such as barbae, 5 o’clock shadow is a perfectly acceptable fashion option.

No matter what look is chosen, it is important for the wearer to be comfortable with the choice. And anything from stubble to a glorious growth of a full beard needs to be washed every day.

There are no comments for this post "What s Cool About Scruffy? Why Some Men Go Unshaven -". Be the first to comment...