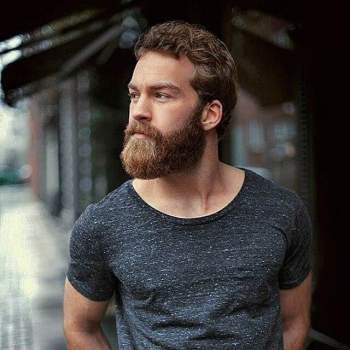 First impressions are the most lasting. Quite rightly said. For a man, his beard might tell most of it. The Greeks consider beard as a sign of virility while Homeric epics sanctify it as highly significant. The 21 Trending beard styles 2016.

century considers it highly significant too, given the current trend of facial hair. If you are 29-30 but still feel boyish, you might just look up to beards as your rescue as they certainly revamp your old look. Here we have some of the trendiest styles for facial hair.

It is characterised by a short growth of beard. It helps gain a masculine coarse look or sometimes even a deliberate messy attempt. This style was highly popular in the 80’s and men gladly welcome it back. Celebs like Zac Effron and Ryan Gosling have sported this trend. A beard like this also speaks of a laid back and easy going man.

Must you aim to grow it, do consider that it needs your attention. The hair is shorter and lines are clearly defined. The neck is shaved and it stops midway up the cheek, joining smoothly with the moustache line. It gives a bold and classy look, also boasting of a strong character.

Undoubtedly, this beard shows you are the manliest. Bold. It works two ways. Classy when groomed and rugged when not. One of the most popular trends this. Our very own Ranbir Kapoor has flaunted this beard numerous times, recall YJHD.

Yes, that is what they call it. Inspired by Jack Sparrow’s ineludible mix of a moustache, goatee and Soul Patch.

Don’t be misguided by its rough look. It does require maintenance. Should you avoid neck beard, shave the upper part of the neck. People also trim the moustache around the mouth. Remember the guy Andrew Garfield aka Spiderman? He was spotted carrying hipster beard recently.

Short pointy moustache with or without hair on the side. It is also called handlebar moustache as it resembles handlebars of moustaches. It has got distinctive long curved extremes. When it is done correctly, it is downright majestic. Yes you got it right. Ranveer Singh. Pleasant personality is also associated with it.

For some it may seem like an arduous task, grooming a beard and it is. There are certain products like beard oil and moustache wax available that helps hold the hair in place, moisturise skin beneath the beard, prevent flaking, dryness etc. Well, shave it right or don’t shave at all, beard is undeniably the most voguish trend of today.

There are no comments for this post "Trending Beard Styles for Men". Be the first to comment...