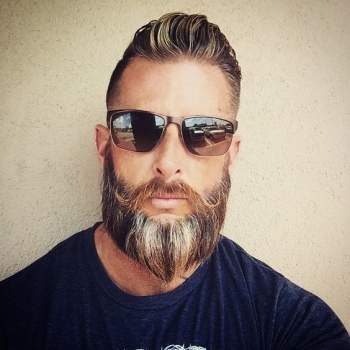 W hen it was founded in 1903, the House of David wouldn’t have struck anyone as a future sports powerhouse. It was more of a minor apocalyptic cult. Beard ideas.

A Christian commune founded in Michigan by Benjamin Franklin Purnell, a self-proclaimed messenger of God, the sect sought to reunite the 12 tribes of Israel in preparation for the return of Jesus Christ at the onset of the new millennium. Members gave all their worldly possessions to the commune and were required to refrain from sex, alcohol, tobacco, and meat.

With nearly a century left before the second coming, members were left with plenty of time to kill. By 1914, Purnell began to field a baseball team as a recreational outlet for his members—and, as a growth-minded religious leader, he realized that the team could be an effective vehicle for spreading the word to new recruits.

The House of David team found early success against local ball clubs, and by 1917 it began to barnstorm around the Midwest. It quickly became a sensation. This was in part due to the players’ flashy fielding, hitting prowess, and speed on the base paths, but even more for their distinctive look. Like the other men in Purnell’s sect, the House of David ballplayers sported extra long beards and hair that flowed down to the belts on their heavy woolen uniforms. Their personal grooming fulfilled a divine edict in Leviticus 19:27: “You shall not round off the hair on your temples or mar the edges of your beard.” They also saw facial hair as a way to live in the likeness of Jesus and his apostles.

The House of David team was a strange sight, especially in a clean-cut era. Handlebar moustaches had become relics of 19th-century tobacco cards; ballplayers of the time were all freshly shaven. Billboards on Fenway Park’s famous left-field wall hawked Gem Safety Razors as a way to “avoid 5 o’clock shadow.”

Their beards and long locks separated the House of David from the competition. By the 1920s, posters advertising appearances by the bearded troupe shouted, “Whiskers! Whiskers!” Playbills touted them as the “most unique attraction in baseball.”

Millions of fans filled sold-out ballparks to watch them play. They were dazzled by the House of David’s invented game of “pepper”—a baseball version of the Harlem Globetrotters famed basketball weave—in which the players with lightning speed tossed the baseball from behind their backs and between their legs and used sleight-of-hand tricks that included concealing the ball inside their bushy beards. The team began to take on all comers, including exhibitions against major league and even Negro League squads at a time when the rest of the sport was rigidly segregated.

In 1927, however, the sect was rocked by a public scandal: Purnell stood trial for sexual assault against young girls in the commune, and for embezzlement. Five weeks after being convicted of fraud, the charismatic preacher died. The religious colony fell into receivership. It would never recover, splintering into factions and eventually ending recruitment of new members in 1947.

Remarkably, despite the negative publicity, the House of David continued to thrive as a baseball enterprise. Numerous factions inside the sect fielded teams using the now-famous brand name, and generic knockoffs of the cult’s teams even began to appear.

By the 1930s, House of David teams began to hire professional players, including future Hall of Famers Grover Cleveland Alexander and Satchel Paige, the Negro League star who wouldn’t be allowed in the major leagues for another 15 years. These ringers were not required to be converts. But, except for the stubborn superstar Alexander, there was one requirement: an immense beard, real or fake. With facial hair marking their celebrity, they traveled the country, carting their own portable lighting system to stage night games, which were a novelty at the time.

In 1932, on one of their many swings through New England, a House of David team brought their lights to Boston. The game at Braves Field, against the hometown Braves, became the first night game ever played in a major league ballpark in Boston. Two years later, after Babe Ruth was let go by the New York Yankees, both the Braves and the House of David were suitors for the Bambino, who in 1931 cavorted in right field wearing a set of false whiskers in an exhibition game against the bearded barnstormers. (Needless to say, the House of David’s strict lifestyle rules held little appeal to a ballplayer used to violating all of them.)

The House of David baseball brand flourished until World War II. Afterward, as television began to bring ballgames into fans’ living rooms, the barnstorming teams began to fold. By the 1950s, the lights went out on the House of David.

W as the astonishing run of this baseball cult really about the beards? Absolutely. As outward manifestations of the players’ religious beliefs, they were a unifying force in the dugout. Even old-timers had never seen anything quite like it. And the beards caught the attention of fans across the country, too.

They did much the same for this year’s edition of the Olde Towne Team. As the wins mounted and the bandwagon gained speed, fake beards began to sprout from Yawkey Way souvenir stands. The Red Sox marketing team rolled-out “Dollar Beard Night” in the waning days of the season, offering $1 tickets to fans with real or fake beards. Today the Twitter hashtag #GetBeard shows up with increasing frequency.

For a franchise that had seen its television ratings fall, decade-long sellout string snapped, and seemingly limitless brand power wane, the beards helped mark a change both inside and outside the clubhouse. Many men will recognize this transformative power on an individual level, says Allan Peterkin, a grooming consultant and the author of “One Thousand Beards—A Cultural History of Facial Hair,” who points out that men have historically grown beards to mark transitions, such as the loss of a job, marriage, or loved one. “For some, it’s a means of reinvention,” he says.

And for the outside world, the shaggy, wacky beards put a new face on a team badly in need of a makeover. Two years ago, the Red Sox were the poster children for overpaid, spoiled athletes who sucked the fun out of sports. The playful attitude of this magical season, by contrast, is encapsulated by the poster depicting “The Wolf,” “The Sick Flow,” “The Ironsides,” and other beard styles sported by the team.

Branding, of course, only works if you have killer content—in this case, wins. And on this front the beards appear to have helped as well. “The way the Red Sox brush and tug them in the dugout when they hit a home run is a real manifestation of how a group of players is attempting to differentiate itself and send a signal that ‘we are special,’” says Stephen A. Greyser, a Harvard Business School marketing professor who specializes in sports business.

Boston fans can’t help but cast their eyes south toward their rivals and note the differentiation between their team and the buttoned-up New York Yankees, which under the ownership of the Steinbrenner family has prohibited players from wearing facial hair beyond mustaches. Some Sox fans, no doubt, might even divine something bigger from the fact that the “Evil Empire” mandates shaving. The Bible, as the House of David acknowledged decades earlier, commands otherwise.

There are no comments for this post "How an apocalyptic cult invented baseball beard power - The Boston Globe". Be the first to comment...