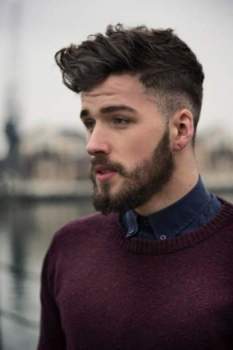 Hair styles are a big part of NBA 2K18 player customization. You can change the appearance of your character by applying different haircuts, as well as several types of facial hair, like beards and moustaches. This is especially handy if you use the face scanning feature to import your own visage into the game. However, for some reason, 2K decided not to let players have a preview of their choices when visiting the barbershop. There are other ways, thankfully, like a video showing all the different NBA 2K18 Hair Styles, Beard & Facial Hair. Hair style and beard.

When you visit the salon, you’ll be offered a bunch of hair styles to choose from. A tiny picture will show you how the haircut looks in general, but you won’t be able to see what it looks like on your character without shelling out that precious VC.

The good news is – there is a way. If you go to the game’s options and choose to make another character, you’ll be allowed to browse through all the hair styles and beards on display. Simply scuplt a character similar to the one you’re using, and there you have it.

If that’s too much effort, and you don’t mind seeing how the hair looks on a completely different player, you can just play the video above – it goes through the entire catalogue of hair customization options.

Keep in mind that you should do your research before you spend on a hair style. Unlike previous games, you don’t really unlock them – they won’t go into your inventory. Instead, if you change your mind and want your old hairdo back, you’ll have to pay for it, again. Since VC is notoriously hard to earn this time around, it’s better to put some thought into it.

There are no comments for this post "NBA 2K18 Hair Styles, Beard Facial Hair Showcase". Be the first to comment...