Different beard trimming styles. The bald with beard look is where it s at in 2016 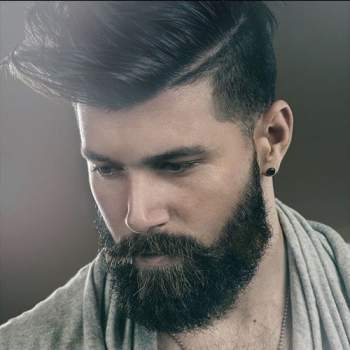 Confidence is something that never goes out of style. If anyone could choose just one element for their look, it would probably be this one. It would not matter whether a person is wearing the most fashionable clothes or expensive jewelry. If he does not have the confidence to pull it off, then it will all be for naught. Having said that, there are certain styles that can only be worn by men who are truly comfortable with their self-image. They do it not to follow the crowd but because they feel it is what suits them the most.

Being bald can be a sensitive issue for most men. It makes some feel that they have lost a certain part of their virility and youth. This can be quite understandable because nobody is truly prepared to lose his hair. Despite this being a very common occurrence for generations, all men actually experience losing their hair for the first time. It is easy to accept other people’s alopecia however it is different to be secure being bald on a personal level. Which is why some resort to finding effective hair loss solutions in the hope to regrow or camouflage what they have lost.

Not all people experience losing hair in the same way. There are also plenty of men that can easily embrace their natural condition. They just resolve to simply shave everything off, without a trace of being self-conscious. These men appear more confident with how they look. There are even others who have a full head of hair that want to mimic this clean shaven style. The reason might not exactly be how it looks that draws other men to want appear this way. A shaved head needs a confident man for it to work. Maybe that is what other men who are not even balding are trying to achieve with this style as well. A self-assured demeanor certainly speaks volumes over any amount of long, flowing head of hair.

Maybe this is why more men have been pairing a bald scalp with beards these days. Facial hair also needs to be worn with confidence. Looking weak and unsure while having it on somebody’s face just does not work. It defeats the whole purpose of having a beard in the first place. A good moustache coupled with a well-trimmed goatee would make anyone appear more manly and in control. It is definitely not for those who would feel self-conscious at their appearance.

For ages, men with beards have been associated with power and position. Tribe leaders, political figures, visionaries and even famous scientists most often than not, had a good amount of facial hair. Genetics plays a huge role in how much hair will actually grow on a man’s face. This usually comes with age, and so does alopecia. Which is probably why men who are balding on top appear wiser and more in command when they are also growing a beard.

Achieving this look could be a simple matter as shaving off the existing hair on the scalp and waiting for the bristly whiskers to grow. Some men are actually lucky enough that they could do this at their own leisure. For those who cannot grow a thick enough beard however, they can resort to a current method available to increase hair density on the top of the head. Follicular unit extraction or FUE is an effective means to camouflage patchy areas of the scalp with the use of healthy hair follicles. This is usually taken from the back of the head or from other areas of the body. FUE can now also be used to directly implant the same hair follicles into the moustache, chin or neck region where hair growth appears sparse. All the patient needs to do is wait for these areas to grow. This would make it possible to have the bald and bearded look in just a few months. He only has to remember to wear it with confidence.

There are no comments for this post "The bald with beard look is where it s at in 2016". Be the first to comment...