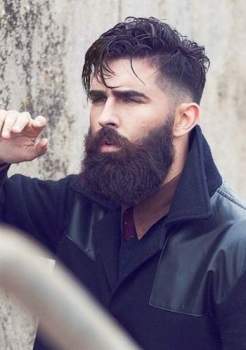 When it comes to the best beard styles, there’s not one best answer. Men will each have their own personal tastes and own capacities to grow facial hair. It’s not one size fits all. That’s why we have picked out the top ten beard styles that will be next year’s favorites. Take a look and see which one you’ll be wearing next. Beard and hairstyles 2016.

Not every guy will be blessed with abundant facial hair, or the patience and the commitment to grow out the beard for months. Luckily for you, short stubbles and short beards will still be relevant in 2016. Even the most impatient of guys can manage to wear a little bit of coverage on the cheeks, on the chin, and along the jawline by wearing a beard style like this.

You can achieve this kind of short beard by not shaving for a whole month or so. Different guys will have different beard growths, though. It may take a shorter time, or it may take a little longer. Just be patient and let the hair grow.

While some guys go for the really long and thick beards, some guys just prefer the really light and thin stubbles. Just like the stubble that you get the next morning. It’s barely there, we know, but with the right styling and shaving, it can actually even look sexier than a full-blown beard!

This is another beard style that we will still see a lot of in 2016. It’s a beard style that will look perfect on guys who can grow a beard but have problems with thickness or consistency. You can keep the thickness concentrated on the chin and the mustache, and then leave the cheeks or the jawline stylishly sparse.

To make the beard look even more seductive, you can match it with a really good haircut that will perfectly frame your face. A short on the sides, long on top haircut will do just the trick.

Good beard styles are not going away in 2016, especially if they look as awesome as this short beard. It just has the right amount of facial hair, and does not overwhelm the face. If anything, it gives the face a nice and symmetrical look. Like the beard is a natural part of the face.

It’s not too thick, nor is too long and scruffy. Shorter beards need more regular trimming and shaping to keep it neat and nice. But you’re guaranteed a manly look anytime, anywhere.

The best beard styles in 2016 are beards that make you look more masculine and more confident. Just like this beard style. What you lack in muscles or abs or kickass tattoos, you can very well make up for with a great-looking beard.

The beard is thick but short, and covers just the right places. It doesn’t make you look like a dirty homeless person. Instead, it makes you look poetic and deep, and rich and powerful. The beard is thick enough to command respect from other men, but not too thick that it looks itchy and rough and turn off the ladies.

Full and scruffy looking beards are also going to be favorites in the coming year. They’re perfect for guys who like the rugged and casual beard styles. Not full lumberjack look, but give it a few more months, and you’re definitely going to make the cut.

The beard is short, but thick and coarse, which is what some guys prefer. They like the rough edges and thick hair, just as much as they like thick and long hair on their heads.

Even if it looks scruffy, it also requires care and maintenance. The beard is trimmed and shaped regularly, and also cared for with special beard products. It only has a scruffy experience, but when you touch the beard, you will find that it’s soft and smooth.

Most guys grow a beard because it best complements their hairstyles. Or because it makes them look more interesting, more attractive, and more intellectual. So as long as there’s a need for a beard, it will never go out of style. As long as guys continue to grow facial hair, beards will never go out of fashion. Certainly not beard styles that look cool and sexy as this one.

Even if people say that hipster beards are finally going away this year, they will still enjoy quite a bit of popularity in 2016. Good beards don’t just go away. They simply evolve and change with the times. It’s alright if you don’t like the hipster beard. There are only certain men with certain personalities who can rock this style of beard, anyway.

If you’ve always been fascinated with the hipster beard, maybe you can finally start wearing one next year. Because it’s definitely still going to be around for quite some time. And while you’re at it, why not start growing your hipster hairstyle, too? Something that’s short on the sides and really long on top, like this hairstyle. Bowtie outfit is completely optional.

So many beard styles, so little time. Here’s to great-looking beards and to the awesome men who wear them!