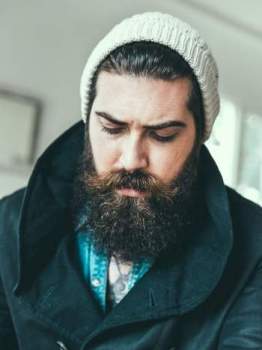 It's a common theory that beards are full of remnants from meal times. Maybe your morning toast or your lunchtime Greggs... even a few odd biscuit crumbs are thought to be lurking about in the bushiest of beards. Men in beared.

But did you ever think that there'd be human faeces festering in your facial hair?

Well guys, you'd better get explaining because new a research study has revealed that almost 50 percent of men with beards are literally full of shit.

The study, conducted by Fragrance Direct and Manchester Metropolitan University, involved taking swabs from men's beards all over the country and analysing them in a bid to discover what lies beneath the scratchy surface.

And while the majority of the study's participants said they gave their beards a good old scrubbing on the same day of the test, the results were still as gross as ever.

The results of the study found that 47 percent of the beards sampled contained the micro-organism 'Enterococcus spp', which is also found in the human bowel and in faecal matter.

You read it right, folks. Actual poo cells were found clinging to all those strands of hair that cover half of a hirsute man's face.

And it's not just the long beards either. The facial hair tested was of all different lengths, thickness and styles - so all you short-bearded men out there, this goes out to you too.

You're probably wondering, how d'ya manage to get shit lodged in your beard?

Well, it turns out, according to the results of another recent survey, approximately 60 percent of men don't bother to wash their hands after using the toilet.

So what do you expect? Using the toilet without washing your hands to then fondle with your facial hair comes at a price.

A spokesperson for Fragrance Direct said: "Caring for your beard it essential for its health, helping it to stay fresh to keep the bacteria at bay.

"Everyone knows to shampoo their hair, but beards need some attention, too. Men should use beard shampoo when they shower, along with conditioner afterwards."

Hmm. I think the results of the study go way beyond fancy beard shampoos and other grooming products the bearded man of today may need to equip himself with.

The moral of the story is: keep those hands clean before you start stroking your beard. You never know what sort of shit could be lurking about...

Megan is a freelance journalist and sub-editor with a BAHons degree in Journalism and Communications. Since graduating from London Metropolitan University, she has worked as a sub-editor and writer for Candis Magazine and later contributed to publications such as The Skinny, Creative Tourist and Huffington Post, among others.

There are no comments for this post "Time For A Trim? Poo Lurks In Men's Beards, Finds Study - LADbible". Be the first to comment...