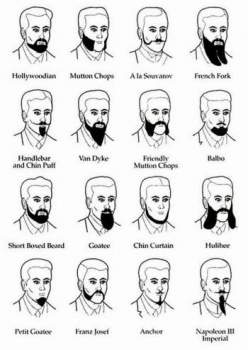 No-Shave November is the perfect time to get inspired by the many beards around us. And if you love a black man with a beard, the Internet has got you covered. Just look at the many social platforms devoted to the beauty of black men’s beards: Bearded and Black and Black & Bearded on Tumblr, Black Men with Beards and Post Bad Beards on Instagram, Travis The Maverick’s Black and Bearded on Pinterest, and Big Beard Business on YouTube. Different types of men's beards.

But not every man can grow a full and healthy beards in the same timeframe, length and style. In particular, black men have different types of hair textures and challenges—ingrown hairs, hair bumps, irritation, patchiness and dryness—which means taking on slightly different processes.

If anyone is a master at the art of black men’s beard grooming, though, it’s Civil Justus, an activist, rapper/musician and all-around social media #beardporn star. His Twitter and Instagram are filled with photos of his impressive facial hair, which has lead to a partnership with the men’s grooming brand Scotch Porter.

The Daily Dot spoke with Justus on what a full beard says about a man, the all-important relationship a man has with his barber, and the must-know tips for other black men about growing full, healthy beards.

This interview was edited for clarity and length.

The Daily Dot: Why do you think there’s such an appreciation for black men’s beards?

Civil Justus: Honestly, I don’t know—it sort of came out of nowhere and it just happened. I think facial hair has always been something. I don’t know the trends of how [or] when it happened [or] when it just became cool … I feel like people associate a beard with strength or power subconsciously. I feel like that’s a thing now.

I remember talking to one of my old managers a while back. I’m going for an interview with him and he was, like, ‘This man knows commitment because look how long it takes to grow that beard.’ I feel there’s not an explicit [message of] ‘This is why we love beards,’ but there’s a lot of subconscious things.

Is it possible to have a beard and still be seen as professional?

It depends on the field you go in. It’s weird because I went to my bank the other day and one of the guys in there had a pretty big beard. Not as long as mine, but he definitely had a substantial beard. He was like, ‘What do you do for your products? How do you get it to grow longer?’ And I was, like, ‘Well, you’re working at a bank.’

I feel like people associate a beard with strength or power subconsciously.

I feel it’s transcending a little bit. It’s a little bit—I don’t want to say acceptable, but now people are like, ‘OK. It’s cool.’ Because the trends are changing so much, I feel it’s not like, ‘Oh, this is not business proper.’ I feel it’s getting there … [although] I have spoken to other people who are like, ‘I wish I could grow my beard that long, but I work in corporate, and I can’t really do it.’ It’s getting to that point where [big beards] can be in professional environments, but I feel some people might not be able to let it rock out as much as I have had the benefit of doing. It’s getting there.

What are some popular styles of black men with beards?

From what I’ve spoken with people, everybody wants their beard to grow longer. The little five o’clock shadow… it’s cool, but what happens is a lot of people, their beards don’t grow evenly. So people were getting patchy beards. People have their short, more compacted [beards]—I feel it’s for if people are in business and can’t really let it grow out. Those are two more popular ones I’ve seen.

As black men, we have different hair types and have to manage our beards differently than non-men of color, correct?

I assume so, and for me, it’s a little different—I literally have I think two or three different hair textures in my beard. In the front of my beard, it’s very straight. I get tight curls around different parts of my beard. … I have to do a bunch of different things to it.

Men of color have an advantage because women in our community know so much about butters and oils.

Men of color have an advantage because women in our community know so much about butters and oils. We kind of have a leg up. I don’t know what white guys do for their beards. I feel I had the benefit of some insider knowledge when I was growing it out.

How would you recommend preventing ingrown hairs or hair bumps?

That comes with shaving. I haven’t shaved my beard in forever, but honestly I just go to my barber. I let him do everything. I try to go every two weeks or so and let him shape up my beard, trim my beard.

If you shave it at the wrong angle, you’ll get those ingrown hairs. Granted, a barber could do it, too, but I feel they’ve been doing this for years. … Also, [I would make] sure the skin [and] hair are smooth, not dried out. That plays a role in it.

How do you keep your beard smooth, even beyond going to the barber?

I was told, ‘No! You’re only supposed to condition every now and then. You’re not supposed to really shampoo all the time like that either.’ I was, like, ‘Oh!’

I got a conditioner for my scalp that I started using on my beard and it was like a peppermint/cucumber type thing. It made my beard feel very hydrated. I never had to deal with feeling itchy. I do that every three or four days to let the natural oils that are there prosper. Then, I use various oils and butters, depending on how I’m feeling. Scotch Porter has a nice beard balm. I also use argan oil. If I’m going to go out somewhere, argan oil is my go-to.

How would you recommend managing the itching, burning or irritation of hair growth for black men who shave and then grow their beards from time-to-time?

It’s mostly making sure you’re face is moisturized. I feel that goes a long way because the difference is night and day. I ran out of a conditioner a while back and I was feeling it. I was, like, ‘This is horrible. I’m going to shave my beard!’ If I didn’t get that conditioner soon, it was going to be trouble.

The few times I used shampoo on my beard, it started to feel really dry. I hate the way it feels. Now I use conditioner. Also, different things work for different people. I tried to use some coconut milk [conditioner] because it smelled good, and it made me feel terrible. I didn’t like it. I started using the peppermint one and I felt great. I recommend it because peppermint has that cooling aspect to it.

What other products do you use in your beard?

I use a Mizani Scalp Care Conditioner, which is a moisturizing peppermint oil, cucumber extract. That’s what I use to condition at times.

I really like [using] Scotch Porter’s beard balm. That one I use most consistently—like, when I’m getting ready to go to work or on my way out, I’ll use that.

I use argan oil. … I just like the way it smells and the shine I get on my beard. Then, it’s preference. Butter, you got to kind of moisturize through. I feel oil is little bit quicker. You can just brush through. Definitely both are effective.

What’s your overall daily routine in managing your beard?

Every three or four days I’ll condition it. Maybe, every other day I’ll use the beard balm. Then on certain occasions, I’ll use the argan oil. Then, daily I just make sure I’ll brush it out. That’s like the biggest thing because again, I don’t like to put too much stuff in it consistently all day, every day. I feel that builds that reliance and potentially can cause it to dry out.

How long does it typically take in growing a beard? Is the time period different for black men and men or color? Or does it just depend?

I think it definitely depends on the person because I’ve seen people who have let it rock for long [periods of] time. One of these guys I knew, he was letting his beard grow for mad long and it just wasn’t as long. In terms of people’s curl patterns or hair textures, his curls are a lot tighter than mine. His beard was long, but it looked really compacted. That’s also an aspect. He continued to let it grow… it might be overall longer, but his curls are tighter. It definitely varies.

To just have a beard, it takes me two weeks. During Hurricane Sandy, my barber was in Queens. I live in Brooklyn. There were no trains running for two weeks. There was nothing I could do, so I just let it rock. Then people started complimenting me, like, ‘Oh, I love this beard.’ I was like, ‘Alright, cool.’ I kept it, but it only took, like, two weeks to grow [it] out. It was still short, but then I would say three or four months, I have the hang time that I have.

You’ve talked about your barber a lot. What role does the black barbershop play in maintaining a beard?

So much of life has been in barbershops. There’s so much stuff you learn there. For the past, like, 12 years, I’ve been going to my Dominican barber. I learned about what’s going on back in DR and learning about what’s [happening] on the block. You get everybody in the neighborhood in there. There’s always something going on. It’s almost like a safe space. I built relationships with all of the other barbers over the years. It’s a commitment.

It’s almost like a real relationship—if I went in there and got my haircut from somebody else, my barber walks in, he’s going to be like, ‘Yo. What are you doing, man?’ If that’s your barber, that’s your barber. He’s seen me without a beard, with a goatee, with a mohawk, with braids. It’s definitely important to have that. He knows what I want. It’s a lot easier to work with, and I trust he’s not going to mess it up.

There are no comments for this post "Beard star Civil Justus on how black men can grow healthy beards, The Daily Dot". Be the first to comment...