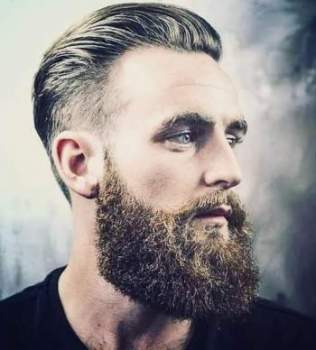 If there’s one quality that men admire in other men, especially men in Hollywood, it’s looking cool. Tom Cruise in Top Gun? Cool. Robert Downey Jr. in Iron Man? Also cool. Dwayne “The Rock” Johnson in just about any movie he’s ever been in? The coolest. But where does that inherent cool factor come from and how do you get it? Cool hair and beard styles.

Celebrity groomers are responsible for (literally) shaping the cool-guy look that most men aspire to, and Jillian Halouska is one of the groomers who makes it happen for some of Hollywood’s hottest stars, including Jake Gyllenhaal, Sebastian Stan, David Harbour, Penn Badgley, and more. That effortless scruff and those imperfectly-perfect waves you see on these men at red carpets around the globe is all a testament to her skill.

For Halouska, less is more when it comes to men’s grooming. She doesn’t want her clients to look like they’re trying too hard, so she opts for small enhancements to a guy’s natural look over complicated styles and techniques.

“I’m just trying to make cool guys look cooler,” she tells Men’s Health. “I want to make them look hot — like they woke up like that, like that’s just who they are.”

Halouska’s clients appreciate her easygoing approach to grooming, which gives great results without too much time and effort. Her methods are just as applicable to the everyman who doesn’t necessarily want to look like a movie star, but like a man who just happens to be a movie star—you get the difference, right?

Below, she shares the simple and straightforward tips she uses to get the coveted cool-guy look.

Give Your Hair a Natural Wave

“I usually start with one of the Leonor Greyl [Styling Sprays]. They have three different types: one if you need moisture, one to liven up your hair, and one if you have greasy roots. Spray it on right out of the shower while your hair is still wet. I wrap sections of hair around my finger and sort of twist it while I’m blowing it out to give it a natural movement.”

Tame Unruly Flyaways With a Pomade

“These pomades from Firsthand Supply are really, really good. There’s varying levels of hold and shine. If you want more lived-in look, you’re gonna want like a little bit of shine to make it look like you haven’t washed your hair. And then if you want like a more matte finish, they have that if you want to be a little bit more put together.”

Add a Dose of Lived-in Texture

“I don’t want the whole hair to have the same amount of consistency throughout. I want there to be a texture throughout that isn’t the same, so it looks more realistic and more lived in. This spray wax sort of works as a hairspray but still gives the hair some movability.”

Use Hair Oil for Movement & Flow

“If the hair is very dry, I’ll add an oil, like this one from Virtue. A lot of guys want to be able to run their fingers through their hai, so I always want it to be movable — not precious. If you add a bit of oil when you’re blow drying it just sort of gives you the effect of having some piece-yness to it. It also adds some moisture without having to use a pomade, if you’re wanting your hair to have more of an effortless flow.”

“Sisley Paris makes really great shampoos and conditioners because their thought process is more of like a skincare. And since most guys wear a hat or a beanie, a lot of them have eczema or dandruff on their scalp. [Sisley Paris] has different shampoos and conditioners that are actually prioritizing your scalp needs. And if you have a healthy scalp, you’re going to have healthy hair.”

Trim the Neck at an Angle

“I use this to trim up the beard to get rid of any random beard hairs that are sticking out. I always I always brush the beards and take off whatever stragglers are hanging around that are not helping the shape. When I do the neck, I never do it straight across. I always do it at an angle, sort of tilting up and down. So that and then I’ll just sort of go in and etch little bits out so that it’s super natural.”

“I use eye patches on everyone, but these from 111SKIN are my favorite. They have one for puffiness, one for lines, and one to brighten if you have a slight under eye tinge. It’s great for when when you wake up with puffy eyes, if you drank too much, or if you took a long flight. It really brightens up your face.”

“This moisturizer gives the skin an invigorating hydration. It reestablishes the buoyancy and elasticity of the skin.”

The Power of a Pore-Filling Primer

“After you’re done putting on moisturizer, you’re going to be very shiny. This mattifying primer fills in the pores and basically just makes a really nice canvas without having to physically put makeup on as a man.”

“I use this all the time because it doesn’t like look like makeup. I use a sponge to apply it, but you can even tap it in with your finger.”

“The Tom Ford Bronzing Gel is my go-to. If you have like a big forehead or something like that, you want to make the edges of your face a bit darker than the rest of your face. This bronzing gel looks really dark but when you put it on, it’s not. And there’s no shine, it just sort of like lightly darkens. I use it in the temples where your hair would be receding. It will just appear to have a shape that’s just a bit more pleasing to the eye.”

This content is created and maintained by a third party, and imported onto this page to help users provide their email addresses. You may be able to find more information about this and similar content at

There are no comments for this post "11 Handsome-improving Tips From Jake Gyllenhaal s Barber - DailyReport". Be the first to comment...