Styles of beards and how to trim them. Why Do Sideburns Grow So Much Faster Than the Rest of Your Beard? - 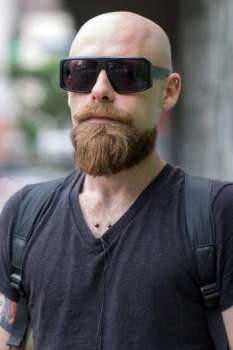 Sideburns are a great look. They help to frame your face and they really work together with a beard to give it a developed look. When someone has a beard without sideburns, it can even look a little odd—as if a part of their beard is missing. Sideburns and goatee.

But many people find sideburns to be a pain because they grow in so fast. Why exactly is this the case?

There are other factors at play that have an effect on the rate at which your sideburns grow. Some of these are nutritional and some of these are situational. We’ll look at both of these and more below to get a full picture of how sideburns function.

The Factors of Sideburn Growth

Facial hair grows at different rates for different people. One person’s sideburns may grow faster than the hair on their chin but that doesn’t mean everyone’s does. When giving advice about facial hair, it is important to realize that what is true for you isn’t necessarily true for someone else. What’s more, your own facial hair changes its rate of growth all the time, which we discussed at length here.

However, it is true to say that sideburns have a tendency to grow faster more often than not. While part of this is genetics, there is something else going on here. It’s not that they grow faster but rather that they often have less issues.

A large portion of the beard-having public does not take care of their facial hair properly. They soak it in water during a shower, but they don’t use oil, conditioner, or balms. This results in hair with a lot of split ends, which in turn slows the rate of growth.

At the same time, people are also more likely to touch or play with their own facial hair compared to their sideburns. Zero care plus a lot of touching equals a much slower growth rate as ends split and hairs get pulled. Add to this the fact that an untended beard had less sheen to it.

Sideburns on the other hand aren’t touched nearly as much, so there is less minor trauma that is inflicted to them. What is more important is their placement on the face. One positive benefit of sideburns is that they help to keep water out of your ears and as such they are placed high up on the side of the face where your facial hair meets your head hair. This has an interesting side effect.

When asked, a large portion of the population would guess that sideburns are head hair rather than facial hair. As such, you run into an issue in which people aren’t able to distinguish whether they are talking about their sideburns or the head hair that meets them. Head hair grows at a uniform rate, so some people may be confusing this uniform growth with sideburn growth.

Something else happens due to the location of sideburns. People are far more likely to shampoo and condition their sideburns when they are washing their hair. While beard shampoo and conditioner are better formulated for facial hair, any cleaning is better than no cleaning. Tie into this the fact that sideburns get brushed more often, and you have yourself a recipe for faster growth thanks to cleanliness.

So, while your sideburns may grow faster than your beard, it is a combination of genetics and care that causes this. As such, it should not be considered a rule of thumb that they grow faster; rather the rate should be observed and understood by the individual.

Since sideburns are facial hair and not head hair, their rate of growth will vary from person-to-person; but the best way to increase their speed is to eat better. Getting plenty of vitamins and essential fatty acids in your diet will speed up the rate of your facial hair growth.

This means that the rate of your beard and your sideburns will both increase. It is unfortunately impossible to increase the speed of one without also increasing the speed of the other. So, if you want faster beard growth but slower sideburn growth, you won’t be able to achieve it.

Should I Apply Beard Oil To My Sideburns?

Applying beard oil to your sideburns is a good idea. While sideburns come in much higher on the face compared to your mustache or your beard, they are still made up of the same type of hair. This means that they will still benefit from applications of beard oil.

Keep in mind that, despite being so close to your head hair, sideburns are not head hair. You should avoid using products on your sideburns that have been formulated for your head, like shampoo or conditioner. This will lead to more split ends, irritation, and a slower rate of growth.

I Want Sideburns But They Come In Patchy. Is This Normal?

Absolutely. Since sideburns are just another type of facial hair, therefore they suffer from the same limitations. This means that they don’t grow uniformly, and they are prone to a varying rate of growth.

When growing your sideburns, the hardest part is often the early period. Patchy sideburns are a common experience for those growing them in. You should expect a four to eight-week growing period. During this time, you may be tempted to give up; but stick through it and you’ll have full sideburns in no time.

I Have the Opposite Problem, My Sideburns Grow Faster Than My Beard. How Should I Manage This?

Since the rate of growth is determined by genetics, this is a common experience for many people, so don’t worry. Before you consider shaving or doing any styling, take a moment to watch this video for hands-on advice:

If you don’t dig the style, don’t worry. It’s only one of many.

Beyond styling, the only way to really manage overly long sideburns is to trim them. An electric razor with multiple length settings can be useful for this, but even a set of scissors will get the trick done. If you are one of the people that grows sideburns quickly, you’ll just need to get used to adding an extra step into your daily hygiene routine.

I’ve Heard of Mutton Chops But Are There Other Sideburn Styles?

Of course, there is! Mutton chops are among the most famous, due mostly to how outdated they look by modern standards. Classic styles involved very bushy sideburns, grown so long that there was even one fashion which curled them in the same fashion as a perm haircut!

These days, the larger fashions are out of style. Sideburns are kept much shorter and tighter to the face. They are also kept much shorter, typically meeting with the hair and extending down just below the ear. These can be shaped to be straight, but a straight bottom has a tendency to look too unnatural. More common is a slight angle to the sideburns or to grow out the bottom so that they look almost like an L.

Which sideburn style is best for you will be determined by whether or not your face has a triangular, circular, square, heart, diamond, oval, or oblong shape? This shape will help you to pick between long, short, thick, thin, wide, or narrow sideburns; and you should be encouraged to experiment to find the style that is best for you.

So, while sideburns often do come in faster than a beard, there isn’t a scientific reason for this. It is instead a random luck of the draw that differs from person-to-person that can be affected by the cleanliness of your beard and your sideburns themselves.

When growing sideburns, give yourself a month of growth before you trim or cut them. This should let them come in thick and long enough to give you plenty of options when it comes to styling. You might find that you need to cut them more often than your beard, but remember that there is nothing wrong with you if they grow slow.

Every beard is unique and every beard is perfect although they’re always more perfect when you care for them properly. But you already knew that, otherwise you wouldn’t be here on Beard Guidance right now.

There are no comments for this post "Why Do Sideburns Grow So Much Faster Than the Rest of Your Beard? -". Be the first to comment...