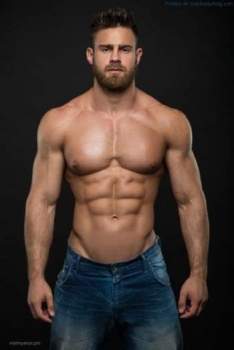 Facial hair has been enjoying a real fashion moment. Bearded men are everywhere you look these days, from billboards and fashion websites, to social media and on the high street. At Talent Management, we’ve seen male facial hair change from niche and unusual, to popular and mainstream in the past few years. Only this month we supplied bearded male models for the latest Lloyds Bank commercial. Male beard model.

So, how did this happen? Beards used to be the preserve of Father Christmas, Captain Birdseye, and a certain kind of ‘rough and ready’ man. Picture Bear Grylls on his way back from an expedition. Fashion campaigns throughout the 90’s and 00’s focused on a clean-shaven look, or a hint of stubble. David Beckham and David Gandy both personified the aesthetic that fashion brands were looking for, with their manly but fairly clean-cut looks.

Several years ago, male facial hair started to have a small resurgence. It was branded a ‘hipster’ look, and came to represent a particular fashion style. It was a look that grew and developed in certain areas of London, in particular the trendy areas of Shoreditch and Hackney. The trend grew through the charity ‘Movember’; a challenge in which men stopped shaving their moustaches for the month of November, and were sponsored to do so. This raised money for prostate cancer research and many men liked their new facial hair so much that they decided to stop shaving altogether.

Moustaches became longer, more groomed, and more ostentatious as the trend continued to gain momentum. A market for facial hair grooming products began to develop, to enable men to sculpt their moustaches into ever more unusual styles. What started as a bit of fun soon developed into a light-hearted competition to see whose facial hair was the most impressive! Moustaches also began appearing on home furnishings, phone cases, T-shirts and greetings cards. They became synonymous with a certain kind of fashion style; a style that consumers wanted to buy into.

As the love of moustaches became more mainstream, beards started to enjoy their own fashion moment. Much of this trend developed through Instagram, via hashtags such as #menwithbeards. The trend attracted both the general public and male models, as men shared pictures of their luxurious beards to inspire others to grow their own. The trend also attracted a huge female following, with thousands of women clicking the hashtag to find the most attractive men — with the most attractive beards.

Online sites such as Buzzfeed delivered lists of the hottest bearded men, and top tips to keep your facial hair in good condition. Etsy started to sell more and more facial hair related products such as old fashioned razors and beard oil. The friendly competition of moustache growing soon tipped over into beards, and the Internet was filled with bigger, better, and bushier facial hair.

As with many looks that developed on Instagram and through the blogosphere, it was soon picked up by the fashion industry and affected male models. Bearded models began appearing in campaigns for major labels, and could be seen modelling clothes on sites such as Urban Outfitters and Asos. At London Fashion Week, a number of male models were sent down the runway sporting impressive, well-groomed beards.

The term ‘lumbersexual’ was coined; meaning a man with a beard, lumberjack shirt, and a very manly and outdoorsy style. The look represented a move away from the androgynous looks of previous seasons, towards an overtly masculine aesthetic. The ‘lumbersexual’ trend was featured in a variety of newspapers and magazines, and it has continued to be a ‘go to’ look for fashion editors ever since.

However, it seems that the fashion world’s love of facial hair may have peaked. Some male models have stated that they have needed to shave, as the number of models with beards has grown explosively. Their looks that were once individual have become more mainstream. When they go to castings, there are many other models that look exactly the same; their beards don’t make them stand out, but instead make them blend in.

Since fashion is an industry in which things are always evolving and changing at considerable speed, this isn’t such a surprise. Beards have become so ubiquitous that they are starting to be seen as a little obvious; something that edgy labels would want to steer clear of. The users of Instagram still seem to be big beard fans, yet the big name fashion brands seem to be steering away from facial hair and back towards a clean-shaven look. But for the general public, it seems that beards may be here to stay—at least for a while.

There are no comments for this post "Male Modeling Jobs and the Facial Hair Debate - Talent Management Blog". Be the first to comment...