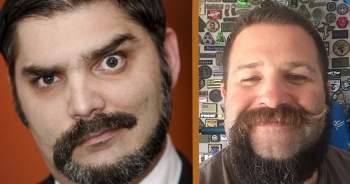 In the world of fashion, it’s all about riding the next wave of change. Things long forgotten keep getting rescued from oblivion, only for them to return to it. That doesn’t mean that we should just sit back and do nothing. If you think you can pull off the new trend, why not become a part of it? Beards may be ornamental, but they do exude masculinity and ruggedness. Men can style their facial hair in two ways: beards or moustaches. Whatever they do is a variation of these. Circle beard style is something along the same line. New trend beard style.

Just like different hairstyles, beard and moustache styles are changing; quite rapidly with the advent of social media. Circle beard is the new trend. It has been around for quite a while and has come and gone out of fashion for decades.

You can call it a goatee, door knocker, or French beard; the idea of a circle beard is the same. As with every other trend story, it all began when once upon a time, a celebrity decided to shave and style their beards in a circle. Now, we can’t exactly say who started it, but somewhere along the way, we started noticing that all the A-list celebs were doing it. So, we obviously decided to dig deep into it.

What Exactly Makes Up A Circle Beard?

Before we get into that, let’s be clear on one thing. Circle beard is not just one style of beard. It has further variations and types. However, it takes on a certain shape, circular, of course, which is why it is so-called a circle beard. It’s a way men can style their beards.

So, a circle beard is a combination of moustache and beard. The moustache links to the patch of hair on the chin (and, sometimes, below the lip). The edges are shaven to give it a soft curve. The hair of the moustache is directly linked to the beard, such that together they form a circle around the mouth, hence the name circle beard.

There are different circle beard styles, so let’s take a look at them.

Of the circle beards, this is the one that combines a goatee with a moustache and hair that grows or extends along the jawline. Think of Leonardo DiCaprio’s beard style in Django Unchained or Kanye West. The chin hair is neatly trimmed in a pointed manner. The cheeks are shaven.

Now, there’s another beard style that is also known as extended circle beard. In it, the chin is essentially hidden by what’s known as a soul patch. It extends from the chin to the area below the lower lip, while the moustache and the beard remain connected.

In this classic style, you have the goatee and the moustache. However, there’s no soul patch in this one, which means that the chin is visible. It gives a neat, clean appearance. You can trim its edges to give it a greater definition. This beard style can also draw more attention to your mouth. So, hey, if you have a perfect set of lips, why not flaunt them using a circle beard?

Growing stubble gives one the perfect hot, messy look. It’s an unkempt look, which, done right, can look extremely attractive. However, you don’t have to grow it all by itself. You can style it with circle beards. Let’s all agree that no one does this better than Hugh Jackman. That man looks glorious in circle beards. In this beard style, the hair on the jawline and sideburns is usually shaven.

Why Shave A Circle Beard?

The biggest reason why shaving and styling a circle beard is a good idea is that it is easy to maintain. If you’re not someone who’s into more bushy, thick beard styles, this one offers a good, light alternative. Another good thing about circle beard is that you can combine it with other facial hair styles to freshen up your look. Moreover, if you have a weak chin, you can camouflage it by growing a thick, full circle beard.

However, it is more suitable for men belonging to a certain age group. Remember, how in Friends, in order to look more like Richard, Chandler got a circle beard. Now, that did make him look a bit older. Although he was still Chandler, so really, he could never actually get old. So, before changing your beard style, do consider these things.

How To Grow A Circle Beard?

Before getting to the trimming part, you should know what to grow on your face in the first place. So, first of all, you need to be patient (my young Padawan). Just let your beard grow so that when the time comes, you don’t mess it up by overdoing things.

Before anything, try to get yourself the right trimmer that you know you have control over. If you’re handling a device that can’t really serve its purpose to you, many things can go wrong. If you’re unsure about the trimming part, you can always go to a salon to see how it’s done for the first time. After that, you can do it on your own.

When growing a circle beard, you should be careful about the cleanliness of your facial hair. Now, there was this one study that claimed that beards were as dirty as toilet seats. However, that’s not entirely true. So, you shouldn’t worry about that for now.

To trim a circle beard, you need to shave hair from your face and neck, including an inch above Adam’s apple. Just the moustache and beard should remain. So, get rid of the surrounding facial hair. Then get to the goatee part. If it’s too long, trim it so that it looks neater and circular, or you can keep it a bit pointy and triangular.

Then go about creating the circle on the rest of the areas around the mouth. Start by trimming the edges to a softer curve. It’s your choice how wide the strip of hair you want on the sides of your mouth. You can start with half an inch to see how it looks. After that, make the finishing touches to the beard. You can try to trim the hair a little more from the upper area of the chin and leave it a little bushy just on the chin. This can also give it more depth.

How You Can Groom Your Circle Beard

Once you have got the circle beard, don’t just leave it up to nature to take care of it. You have to make sure that you are regularly grooming it. You have to constantly make sure that the sides are neatly trimmed, and the edges made precisely. Otherwise, it might just end up looking messy and not in a good way. If you don’t think the trimmer might do a good job, you can always go for scissors. They can give you more control over the whole process.

Try to use beard oil so that your facial hair doesn’t look scraggly or dry. Beard oil can help keep your facial hair moisturized. However, that doesn’t mean that you make it end up looking too oily. That’s just as off-putting, maybe even more.

As the hair in your circle beard grows, you should use a hairbrush to style the beard the right way. Use a conditioner when washing the beard hair. Don’t forget to give it some love. After all, it can give you some dashing looks, so why not take good care of it.

Do You Have the Right Face Shape for It?

That’s a thing, apparently. Just like hairstyles, for instance. We all know that, certainly, not everyone can pull off a bowl cut. It’s pretty hard to actually find someone who looks good in that. With circle beard styles, there are certain face shapes and age groups that better carry them than the others. If you don’t think it’s your cup of tea, you can always have a full beard.

Those people who have an oval, round or heart face shape can look quite good with this beard style. If you have a square face shape, a circle beard would look perfect on you (as does everything else!). Think of Henry Cavill. That man is incapable of looking bad. So naturally, he was easily able to look attractive in a circle beard. Other celebs who popularly still do or have had this particular beard style include Chris Pine, Bryan Cranston (Breaking Bad), Christian Bale, Leonardo DiCaprio, Brad Pitt, and Dwayne Johnson.

On A Final Note

It’s hard to go wrong with a circle beard style. You need to grow your facial hair to the desired length before you go about trimming it into the shape of a circle. There are many circle beard styles that you can experiment with so it’s on you what to do. While it may just be moustache and beard, circle beards are in trend for a reason, after all!

There are no comments for this post "New Trend Alert: Circle Beard! - Longevita Hair Transplant". Be the first to comment...