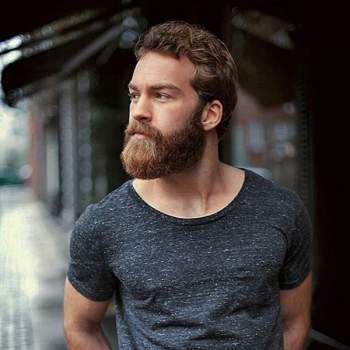 Cool beards are taking center stage on your TV screen! Short or medium stubble, circle beard, full beard, you name it-- it seems like a beard has become the best accessory for men on TV these days. We've compiled a list of our bearded brothers gracing the small screen. Check out these badass TV characters with notable beard styles. Who knows, you may just cop their look (or you can at least try). Cool beards.

Seven seasons later and Jon Snow's scruff has remained beyond reproach. From being the bastard of Winterfell, he rose to be the Lord Commander of the Night's Watch, was betrayed and murdered, resurrected, and finally crowned the King of the North — all while sporting an awesome beard. Keep your mane as sleek as the King of the North with the help of Wild Willies Beard Oil!

How Will Graham finds time to maintain his stubble after all the bloody serial killer investigations he does, we'll never know. NBC canceled the show without this big reveal. You got to admit that's one good-looking scruffy beard. Yours can look as good too, after using this!

It's hard to mention Guy Fieri without picturing bleached tips and a goatee. Nevertheless, it's his signature look and it's here to stay. While it's not at the top of our "must try" list, you have to admit he makes a good case for finding the style that's right for you and sticking with it as your personal brand.

In a world where any minute you could be the undead's next snack, keeping a clean cut might not be a top priority for Rick Grimes. After all the traumatic losses he's been through, plus the fact that he may never find home again, Grimes grew out a grizzly beard of sadness that he kept until the series' 5th season. However, you're not in a post-apocalyptic world, so you have no excuse not to wash your beard the best way it deserves.

6. Connor Walsh, How To Get Away With Murder (Jack Falahee)

If having a well-groomed beard were a crime, Connor Walsh would top the most wanted list in California. This cunning law student can get away with anything, with a little help from his looks and smarts.

His journey back to King's Landing with Brienne of Tarth after Lady Stark set him free led to one of the greatest character development arcs in a television series. He lost his sword hand, wore rags, grew a beard — a complete opposite of the golden boy Lannister knight we'd come to despise at the beginning of the series. Four seasons later, the Kingslayer decided to sport a beard — and he sure is slaying it. Don't murder your beard with low-quality grooming kits, treat it with respect.

The iconic Heisenberg look wouldn't be half as striking without Walter White's circle beard. The genius of this show isn't just manifested by its wit and dialogue, it's also integrated into the production design. As he descends into the power-mad, egomaniac drug kingpin he's meant to become, Walter White noticeably started wearing darker colors and growing his beard out.

10. David Letterman, My Next Guest Needs No Introduction

This recent addition to the bearded family is a genuine favorite. What started as a badge of late-night-show retirement, became the new permanent look for Mr. David Letterman. The man could have never worked again, proud of his life's accomplishments; instead, he started a monthly Netflix show where he interviews celebrities and world powers--and grew a Santa Claus beard to boot. Once you're retired and can kick back, relax, and relish in your life achievements, we highly encourage you to do the same.

Here are some more of the most badass mustaches and beards on the big screen:

There's no stopping the beard trend! We are pretty sure that the number of maned characters on the small screen aren't going anywhere but up. If you want to achieve the kind of beard that matches these, then maintain yours with the best beard products.

Which of these beards did you like the best? Let us know in the comments section below!

There are no comments for this post "10 Cool Beards On Television, Wild Willies". Be the first to comment...