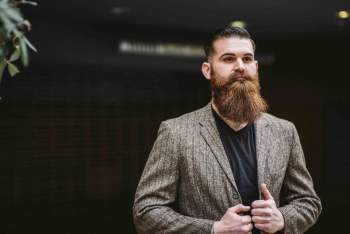 Ah, the beard: imposing, grand, and ultimately magnificent. Contrary to popular belief, pulling off a proper beard is an endeavor that requires both discipline and patience. Don’t believe us? Well, let’s just say that there’s a very, very thin line between “handsome outdoorsy lumberjack” and “deranged hobo who uses subway rats as smartphones.” Suffice it to say that a simple stray curve or asymmetrical bump is all it takes to make or break a man’s glorious beard. Don’t worry, though, as we understand the struggle and have come up with the ultimate list of beard shapes and beard styles that will help you choose which face bush suits you best! Beard styles for work.

The Garibaldi is the kind of beard that’s perfect for men with either a rectangular or oval head. This full-bodied face mane accentuates your face’s natural curves. Paired with a neatly trimmed mustache, the Garibaldi can be as long as you want. And best of all, it’s pretty simple to pull off: just let your beard grow naturally, all the while trimming (Note: not cutting) its edges and mustache to achieve that symmetrical look that’s key to this style.

Just its name alone commands respect! The Boss is the kind of beard that doesn’t discriminate: it works with whatever head shape you have. So, how do you go about it? Simple, really, as long as you observe proper maintenance. What you want to do here is give your sideburns some fade, which then gradually becomes thicker until you reach the beard. Make sure that no strand or patch of hair is left untrimmed and you’ll be rocking this style that mixes the rugged appeal of full-bodied beards with that preppy, structured look. Just remember: keeping up with its growth and trimming when needed is the primary objective in Bossing it up.

Another style that goes with any head shape is none other than the Razor’s Edge. And there’s no other way to describe it other than the word “classic.” As such, we recommend the Razor’s Edge if you want to play it safe for now without sacrificing style. Now, you can think of this style as sort of The Boss’ scruffier – though in no way less good-looking – cousin in the way that you’re also doing faded sideburns here that gradually flows into a full beard. The only difference: The Razor’s edge requires less shaping around the edges and instead only requires that its sides are always symmetrical.

Nothing says “dapper” than a handlebar mustache, and it works perfectly with a neatly trimmed long beard. The question is, how long exactly do you need to grow your beard to achieve that perfect complement to your handlebar mustache? Well, a rule of thumb is growing it anywhere between three and a half to four inches long, and then just maintaining that length and grooming it regularly. As a bonus, you can even opt to go with faded sideburns to make your beard and handlebar mustache stand out. With this, you’ll be riding on zeppelins and gallivanting about town in no time!

Apart from the pillaging, the axes, and the inhumanly intense drinking, what makes Vikings the dashing scoundrels that they are? Why, the beard, of course! Now, a word to the wise: of all the styles we’re showing you here, the Warrior is probably the one that requires the most patience and maintenance for you to properly boast it. We’re not talking about inches here; we’re talking about feet! Simply put, you’re going to have to allow your beard to grow at least 12 inches (a foot), all the while letting your mustache and sideburns freely flow down your face. Just keep in mind that the most important part of The Warrior is the chin. With its length, you can’t simply just have it hanging down or getting shaggy all over. No, you’ll have to part them in two and braid them to get that over-the-top effect you deserve. For Valhalla!

Whether you have a square or round jawline, this no-nonsense style would make you look both neat and gruff at the same time. Regardless of the length, you’re going for, getting a polished beard on you requires one simple rule, and that is to trim all sides – from the cheeks right down to the chin – to achieve an even, clean shape. Simple, elegant: the polished beard is never out of style.

Named so after Beardbrand founder Eric Bandolz, and this style is not for the facial hair novice. At the least, the Bandholz may take at least half a year to grow, but the real challenge here is not having to trim or shave it for the whole duration to achieve the style’s signature shape and volume. We’re not going to lie: there will be times that you’re going to look like a crazy, homeless dude in the process. But like how a meager caterpillar transforms into an elegant butterfly, the Bandholz’s resulting full-bodied look is as glorious as they come.

Don’t let its look fool you: the Old Dutch beard is one of the hardest styles to pull off in spite of its simple grooming and maintenance requirements. Generally speaking, this particular beard style demands no mustache at all, instead opting for a full, flared beard that goes from the sideburns right down to the chin. As such, regular combing and trimming is of the utmost importance of you’re going with this style.

As its name suggests, thin beards are short, neatly cropped facial hair. To achieve this style, simply go with faded sideburns that gradually become thick towards the beard itself. As for the cheeks and chin, make sure that they have some definition on them, and you do this by opting for sharper edges than volume. As for the mustache, it should be neatly cropped and only about the same volume as your beard.

If you’re going for a rougher, more outdoorsy look, then we highly suggest going for a bush and coif. This style balances your facial hair’s natural growth with just the right amount of maintenance that all you have to do is keep the chin’s shape rounded with a bit of sharpness to it, and let Mother Nature do the rest of the work. And with that, we hope you’ll now be able to choose which beard shape and style is perfect for you. Just keep in mind that you should be able to feel comfortable and stylish when selecting the right style to go with. After all, there’s no need to sacrifice one for the other. Get growing!

Comments will be approved before showing up.