Is facial hair in style. Long Beard Styles That Look Awesome, The Unknown 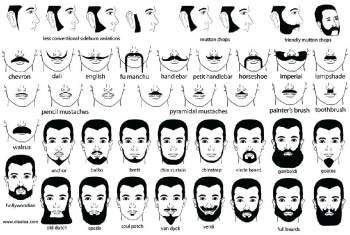 Growing a full and long beard is a right of passage for men. A great beard can transform or compliment your overall look, giving you a masculine aesthetic that can be groomed and styled to suit your appearance. Here are 5 awesome long beard styles that you should consider if you are looking to grow a beard. Beard styles and their names.

Is there anything more masculine than a Viking? Aside from sailing vast distances, plundering and raiding at will and without fear, the vikings also knew how to rock an awesome beard.

Although vikings actually donned multiple styles of beard, the classic viking beard style is generally regarded as long and full, with shorter sides and combed and styled into the desired shape. Braids and beads are optional.

Good news, due to the fullness and length, a viking beard works for most face shapes. If your face shape is round, oval, triangle, heart shaped, square or diamond, the viking beard style should work if you style correctly.

Well pretty much the entire male cast of the series Vikings of course.

A full beard is simply a term used to describe facial hair that covers all the key areas of the face that hair grows. These are your chin, cheeks, lips, sideburns and jaw.

A full beard is the foundation for many of the best long beard styles, and there is a general misconception that a full beard is left to run uncontrollably wild. Most men will opt to carefully groom and style a full beard to suit their face shape and sense of style. A well groomed full beard is a great accessory to have if you can grow and maintain it properly.

All face shapes can pull off a full beard if styled and groomed correctly, but for the classic full beard the best face shapes are rectangular, oval and diamond.

This could be a very long list, but George Clooney, Ben Affleck, David Beckham, Jake Gyllenhaal are all examples of celebrities who have at some stage rocked a full beard.

A ducktail beard is often used to portray a certain level of sophistication, but it can also be groomed and styled for a more urban look. A lot will depend on the hairstyle and clothes that you choose to pair with this awesome beard style.

Given it's unique style, the ducktail beard works best for face shapes that are an inverted triangle, diamond and rectangular.

The Garibaldi beard style is named after Giuseppe Garibalidi, an Italian general from the late 19th Century that sported a distinguished beard with a rounded bottom.

Inspired by Giuseppe Garibalidi, his namesake beard integrates a moustache into a full beard with a rounded finish. This simple twist gives a great masculine look that works particularly well on men with a muscular physique.

It's versatile enough to work with various face shapes, but usually looks best on an oval or rectangular face shape.

A hipster beard is another awesome long beard style when executed effectively, and is heavily influenced by your overall look. A hipster typically follows the latest trends and fashion, usually with a desire to stand out from the mainstream crowd.

Hipster beards typically have a perception of being grown and kept in a more 'au naturale' state versus other beard types that require more precise grooming. This type of beard style can be used to compliment your non-mainstream look and also looks great when used in contrast with more formal clothing to give you a contemporary edge to your look.

Oval faces tend to pull this off the best, but it should work comfortably for rectangular, square, diamond and heart shape too. Just groom the beard shape to suit your specific contours.

A great beard deserves to grown on healthy skin and complimented by a healthy body and mind.

For fitness and wellness follow this link for out blog.

Self-confidence and self-esteem articles are here.

There are no comments for this post "Long Beard Styles That Look Awesome, The Unknown". Be the first to comment...