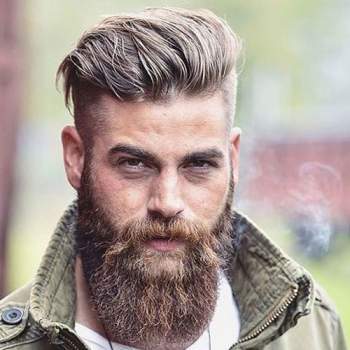 Gone are the days when all sportsmen did was focus on the sport. Owing to the digital revolution and the surge in social media usage, today the ‘public’ in public figures is taken too seriously, so much so that everything about celebrities’ lives, right from the food they eat and the people they date to the holidays they go on and the hairstyles they sport, becomes noteworthy news. Cool hair and beard styles.

Given that Bollywood and cricket are the biggest religions in India, cricketers in our country are followed, revered and even worshipped, just as much as actors and actresses, if not more. That’s why we see them signing brands deals, endorsing products and also taking up acting projects! What’s more, the current generation of cricketers are also very particular about wearing the best clothes and sporting trend-setting hairstyles, because these things greatly impact their brand image.

Today, we look at eight Indian cricketers and their famous hairstyles that you can get inspired from.

Virat Kohli, the captain of the Indian cricket team, is quite the trend-setter. The man is known to have a fierce fashion sense and looks on-point at all times. He has influenced many youngsters to recreate his cool hair and beard styles. The most notable one, that he has been sporting lately, is the ‘Pompadour’ - which features short hair on the sides and at the back of the head, with longer flicks on the top, which he usually styles upwards.

The ex-captain of the Indian cricket team has an understated charm, which we realize has a lot to do with his hairstyle. He sports a lowkey crew cut, which has the sides of his head almost shaved while the top remains dense. The hair on the top of his head remains intact in the shape of spikes, which make him look like a mix of cultured and cool.

The captain of the Punjab team in the coveted Indian Premier League, is said to have an amazing sense of style apart from being an amazing batsman. With sharp cuts and lines, his hairstyle makes him stand out in the crowd of cricketers. It follows a gradation of sorts, starting from an almost shaved off part near the ears, to a crew cut above it and long, luscious flicks of hair that neatly fall on one side of his hair, making him look suave and smart.

Ravindra Jadeja, the all-rounder cricketer who is a part of the Chennai Super Kings team in the Indian Premier League (IPL), sports a hairstyle that perfectly complements his facial structure. Given that he has a broad face, his hairdo helps accentuate his features. The hair on the top of his head is neatly styled upwards, which also makes him look formidable and tall. The sides, though, are trimmed short, which is an effective way to balance out the volume created on the top.

The Delhi dude Shikhar Dhawan, who plays for the team of his own city in the IPL, has a hairstyle unlike any other. He rocks an extremely-short, almost-shaved hair with a little ponytail at the back, which helps draw all the attention to his sharp features and large, dense moustache. It’s not an easy style to pull off but Shikhar Dhawan carries it so well!

Rishab Pant, who comes from Northern India and plays for the capital’s team in the Indian Premier League, sports a hairstyle which sets him apart from the rest. Making the most of the natural sleekness and gloss of his hair, he has long flicks of hair falling on one side of his head and to some extent, his face; the sides, however, have been kept short, to draw more attention to the longer strands on top.

Shreyas Iyer, the captain of Delhi Capitals in the IPL, has a unique hairdo. Given that he has a small face, he has aptly chosen a voluminous hairstyle which makes him look bigger and stronger. His long, straight hair is usually worn upwards, which adds to his height. The sides of his head, however, have been shaved off to elevate to make his hairstyle look more happening, overall.

A former cricketer who is known for his remarkable performance in One Day Internationals (ODIs) and World Cups, Yuvraj Singh is one of the most inspiring and influential personalities in the field of Indian Sports. Apart from his sporting prowess, the man also has an understated sense of style to him, which youngsters can take inspiration from. He’s among the few Indian cricketers are curly heads and proudly embraces his natural mane. He has, of course, experimented with different styles, but has always retained the natural elements of his hair. That, complemented with his fully grown beard, make him look dapper and dashing.

We love how these cricketers are experimenting with their hair and setting stylish trends for the youth to follow!

There are no comments for this post "Virat Kohli, MS Dhoni Other Indian Cricketers (Past And Present) Whose Hairstyles Are Cult-Worthy - Grooming". Be the first to comment...