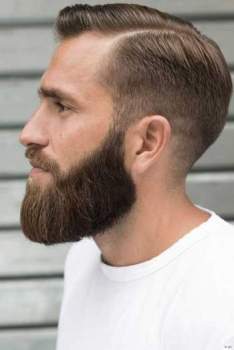 In the Arab world, men’s beards are more than a personal style statement, they’re bound up with various complex religious and political currents too. Traditionally, Arab men who sport facial hair are viewed as deeply practicing, strict Muslims, often serving as a visual signifier of the person’s beliefs and values before even interacting with them. Cairo-based journalist Ashraf Khalil states “It’s a sociological signifier…There are a couple of different styles in play…You learn to develop a sort of internal chart.” Mens facial styles.

Wearing long beards has often been associated to religious affiliation, however nowadays in Egypt growing a beard has also become more of a personal freedom and liberties campaign. This comes after decades of Mubarak’s rule in which civil servants and many employees were forbidden from growing their facial hair as part of uniform rules. However at the same time, growing a beard may now also be seen pledging allegiance to the Muslim Brotherhood, who tend to grow full, well groomed beards and mustaches. Another prominent indicator is the beards of Egyptian Salafists-the ultraconservative Muslim group-that favour the long, untamed beard with a shaven upper-lip, and may even dye their beard with henna.

Middle Eastern men in general have long been famed for their love of growing moustaches but remaining otherwise clean shaven, and nor does the facial hair code escape Arab leaders, most sporting well kept moustaches. Even in Turkey, facial hair has its own rules, with the “almond” moustache being common of men part of the AKP party. Facial hair has long been a sign of masculinity, power and virility. Ali Mezdeği, a Turkish cosmetic surgeon and Irfan Atik a tourism agency manager that specialises in hair transplant both attest to the increasing numbers of Arab men requesting facial hair transplants in Turkey, with most customers hailing from Saudi Arabia, Kuwait and the UAE, often to boost their chances in business or before getting married. The wide prevalence of Turkish TV series in Middle Eastern countries is also having its affect on dictating men’s facial hair fashions, with many young men now going for the stubble look of lead actors such as Kivanç Tatlituğ or the rugged style of Kenan Izmiralıoğlu.

Facial hair also seems legitimate topic for insult, with the aide to Saddam Hussein in 2003 insulting the Kuwaiti Minister of State with “Curse be upon your mustache!”. As is evident, culture is bound up in every part of our lives, from our beliefs and values to the meaning of our outward appearances.

If you want to better understand the diference in cultures and why people do what they do, contact us to get details on our courses ranging from culture or country specific courses to tailored programmes there is bound to be a course that suits you!

There are no comments for this post "Decoding Facial Hair in the Middle East: More than a Style Statement! - Creative Word". Be the first to comment...